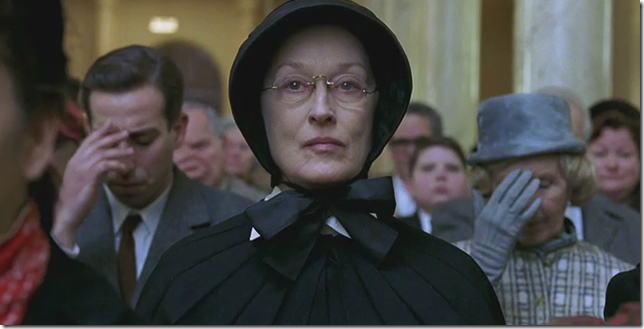 My professors at Film school had always said that the measure of a good film is if you are still able to digest the story completely on first viewing after you turn it to mute. Stanley Kubrick also uttered something like that. In other words, it has to be visual. Show, don’t tell, they say. I believed that, too. Until I realized that sometimes, what is told is just as important as what is shown. Films can still be great even with the visuals fading subtly in the background. And I have proven that to myself through films like The Hours, Closer and most recently Doubt.

Doubt is a talkie. Yes, it has some moments of visual representation and it is semiotically rich. (Signs are littered all over the scenes.) But ultimately you won’t survive it if you don’t pay attention to what the characters say. Most of the time, things are said, not shown. But it shouldn’t be taken against the film because it works.

Doubt encourages our moral convictions and, at the same time, questions it. It paints a huge question mark on people’s dangerous tendencies to assume and come to conclusions easily and precariously.

The funny thing is, after watching the movie, you are left in the dark. You still don’t know what really happened. No closure. No shocking conclusion. Yet you are satisfied. There’s a certain comfort in not knowing. And that makes it more beautiful.

Doubt is simple, solid, and strong. Its density and potency it draws from its simple plot made complex by the characters’ strong emotions. It is safe to say that half of the film is its casting. Had the roles landed on people less talented than Meryl Streep, Philip Seymour Hoffman, and Amy Adams, it could have been a disaster.

The best thing about this movie is that it can’t get any more realistic than its approach. It is admirable how the filmmakers decide to go against showing what could have been the “key�? scenes in the film. Because in real life, we don’t really know. And we can’t always be sure about anything. In reality, when we choose who among the people involved is the one telling the truth or whom to side with, the only thing we have to base our judgment on are our instinct, our morals, and most especially, our faith in these people.

Then the cloud of doubt enters our head to blur that thin line of certainty because it finally sinks in. That the only thing we can rely on is not what we see but what we are told. And it pierces us because we know, although we can always doubt it, that it is true. That in most cases, we can never be sure. 4.5