When one of my bestfriends and I were at a resort somewhere in the south three years ago for his despedida party (he would be flying to London in less than two days), we decided to leave the crowd for a moment and stay on the beach. We were lying on the sand. I was staring at the moon and I was quite sure that he was staring at me. 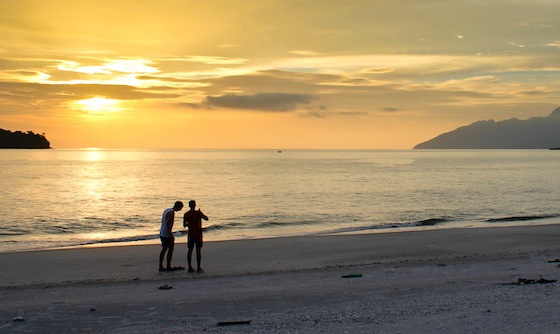 He was the first to speak. “Have you given it a thought?”

“I just don’t. Why does it always have to have a reason?”

He didn’t utter a single word. And then he sat up and felt the grains on his palms.

Then he spoke again. “We’re bestfriends.”

“And it’s all we could ever be. We’re bestfriends. And we’re both guys.”

I just looked at him while he stared blankly at the sea. Then he somewhat rubbed his palms against his knees, and said, “So you really don’t feel anything for me? Anything more than friendship?”

“You’re too honest, it hurts. You never lie. Never.”

Then the moon caught my attention again. I just stared at it for God knows how many seconds.

By the time I could even finish that sentence, he was already standing, about to leave. He didn’t even hear what I just said. I watched him as he walked away.

We’ve never seen each other again since.