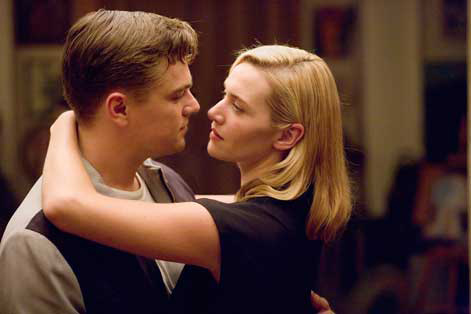 Suburbia. Boring as it seems, suburbia is a deep well of materials for film and TV. The loneliness and grief found in suburbia, as shown in films such as American Beauty and The Safety of Objects, make me wanna thank God I’m living a cosmopolitan life despite EDSA and MMDA. Wala lang, nabanggit ko lang.

Revolutionary Road is about two people who are trapped in a predicament called “family.” Personally, I know so many people who call that walled place they stay in a “prison,” rather than a “home.” (My parents, for example, wahaha.)

The movie succeeds in showing the couple’s desperation to free themselves from their suffocating predetermined domestic roles and their frustration that led them to turn on each other, leading to the deterioration of their marriage and ultimately themselves.

Leo and Kate delivered painfully convincing performances, you’d forget they are the same couple in Titanic. Or that it is actually their reunion movie. I’m not a fan of Leo’s but he exhibited immense maturity in this movie. And Kate, well, I declare her name synonymous to the best of acting performances.

Although it’s not really an entertaining piece, or something I’d wanna watch (over and over) again, this is Sam Mendes’s best work. And it should have been nominated for Best Picture. Why, Oscar, why? 5.0