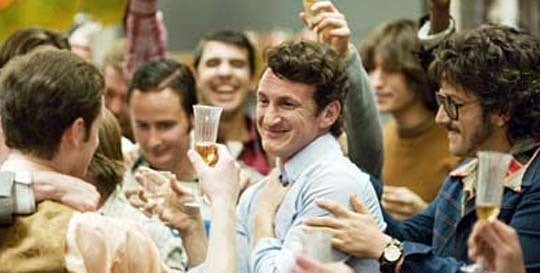 Harvey Milk was the first openly gay man to be elected to public office in the United States. Well, the film is about that. Oh yeah, it’s so timely. With Obama now the President (not that Obama is gay) and the Proposition 8 issue and all. And since it’s a biopic, you know what to watch out for — acting performances. And man did Sean Penn deliver a divine one. It’s probably his best ever. His every twist and turn is so swishy convincing, even the dormant gay alter-ego inside Mr. Oscar will come to life. Oh wait, The Oscars is gay. Hehe.

Director Gus Van Sant’s decision to narrate this familiar story with exuberance and gaiety is impressive. He managed to tell an inspiring story of a social movement and a man who started it in a manner that is awakening, compelling and touching at the same time. It’s like watching a propaganda film except it’s not irritating. Hehe.

Although the emotion and tension levels are flat throughout the film until the last few minutes, the movie keeps your attention in an almost hypnotic way. It’s amazing — it’s not exactly a visual treat nor a plot wonder but you’re just sucked into Milk’s world and you don’t wanna get out of it. Maybe it’s just Sean Penn. Maybe the film itself. Who cares? 4.7