I spent most of my years in Batangas and although my Dad was from Masbate/Palawan, I’ve always considered myself a 100% Batangueno. I’m your typical Batangueno — great and proud of his roots. In Tagalog, magiting at mayabang. Joke lang. Pero half-meant. After all, wala pa akong nakitang Batangueno na hindi proud na taga-Batangas. Gaah, that’s for another story. 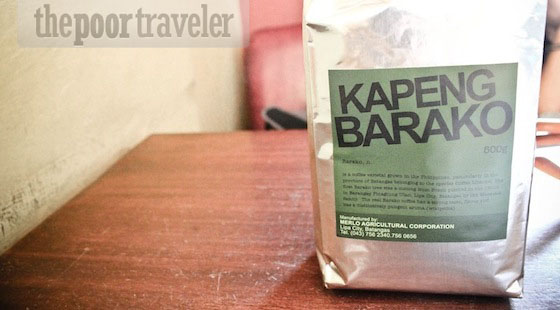 My mother has a store in Lemery’s New Public Market. Batang palengke ako, ika nga. I used to roam around the market. My eyes, feasting on almost endless colorful arrays of stalls selling toys, clothes, food and other stuff. One of the most noticeable colors also has a very noticeably strong smell. Brown. Coffee. Kapeng barako.

Barako is not a common coffee variety, although it is abundant in Southeast Asia especially in the Philippines. It has the largest beans of all the coffee varieties. Its taste is said to be superior to Robusta, and most Filipino coffee drinkers prefer Barako to Arabica. The Arabica-Barako blend is a popular gourmet coffee. Barako is considered to be the best among Liberica species. (Wiki)

The Lemery Public Market was like a vast coffee pantry. To be honest, even when sleeping, I’d know if we had entered the market premises once that aroma started tickling my nostrils. I used to see at least a couple of “barako stalls” within one block. Parang bigas na may mountain range-type na nakadisplay tapos doon sinasalok yung coffee beans or powder. In one lane, I’d find at least five coffee stores. And God knows how many lanes our market had at the time.

Since I stepped foot on college, I had always asked my mum to buy me packs of kapeng barako. I had not gone back to that market. Until last month. Seven years had gone so fast that I failed to see how much that market changed. At the time, I knew something had changed but I couldn’t quite put a finger on it. I couldn’t figure it out.

Last month, I was approached by someone from Howie Severino’s team from GMA7’s iWitness. She asked me what was worth featuring in or about Batangas. Topics flooded my mind — from the fish pens on the edges of Taal Lake to the soon-to-be-erected Monte Maria Shrine (bigger than Rio de Janeiro’s Jesus Christ the Redeemer) to political dynasties (ahem Ermita ahem Leviste ahem).

As I was thinking of something to suggest, it hit me. What is “wrong” with our local public market today, what’s changed, what’s missing are the barako stalls. They are practically vanishing.

But it’s not just in Lemery. Batangas is losing it. Barako is, in fact, nearly extinct. Why? Wow Batangas enumerates the reasons:

“Many farmers believe that harvesting coffee is nothing but a dreadful waste of time and effort. There are several reasons why farmers refuse to farm coffee. First, it is because they can’t assure themselves that they can earn a profit. The world price dictates how the local price should be.

Secondly, many agricultural lands were sold off to build commercial, industrial and residential areas. Since farmers can’t afford to pay large land taxes, they decided to sell their own lands and look for another way to earn larger money and secured profit. Although some of them, instead of selling their lands, switch to planting more profitable crops into which they can gain larger than what they had before.

The next problem is the lack of modernization and technology. In other countries, they use modern machineries and equipment to harvest coffee. Although some of the large coffee farms can afford these machineries too, majority of Filipino farmers use their hands in doing almost everything.”

And apparently, the coffee capital of the Philippines shifted to Amedeo, Cavite. To the ire of some Batanguenos. But Amedeo has been rehabilitating the coffee industry for years now.

And it makes me sad, considering how much of Batangan glory is coffee. According to this article by Sunstar:

“In the Philippines, coffee has a history as rich as its flavor,” says the National Coffee Development Board (NCDB). The first coffee tree was introduced in Lipa, Batangas in 1740 by a Spanish Franciscan monk. From there, coffee growing spread to other parts of Batangas like Ibaan, Lemery, San Jose, Taal, and Tanauan. Batangas owed much of its wealth to the coffee plantations in these areas and Lipa eventually became the coffee capital of the Philippines.

“By the 1860s, Batangas was exporting coffee to America through San Francisco,” the NCDB records. “When the Suez Canal was opened, a new market started in Europe as well. Seeing the success of the Batangeños, Cavite followed suit by growing the first coffee seedlings in 1876 in Amadeo. In spite of this, Lipa still reigned as the center for coffee production in the Philippines and Batangas barako was commanding five times the price of other Asian coffee beans.”

I applaud Cavite for trying to revive the barako culture; I really do. I just wish that we, Batanguenos, could do the same. History shows how much Batangas owes these little brown smelly beans. And for that alone, I think we have a responsibility to revitalize the barako industry. Maybe we could do something like what Cavitenos do.

I never got back to that iWitness Researcher. But I hope the barako problem gets more attention. I hope that when I come back to that market I used to roam around in, I could see that one color or smell that strong aroma or dip my hands into those mountains of grains that I missed the last time I was there.