Last Thursday, Globe and Warner Bros Pictures invited me to the special screening of “The Hangover” at Greenbelt 3 in Makati City. The people were friendly. The cocktails were fantastic. The movie was entertaining.

Entertaining. Hmmm. A good friend asked me if “entertaining” was enough for me to actually like a film. I answered him with a confident “of course.” “Sometimes,” I told him, “I just want to see a movie to be entertained. I have a habit of checking my Film graduate self at the theater door before watching. I don’t expect to be bothered or hope that the movie would have a potential to change the world. Sometimes, I watch movies because I just need to laugh.”

The Hangover is one of those movies. 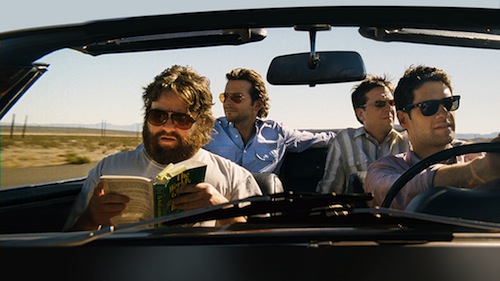 This Todd Phillips-laughtrip was something that could hit 11 in the 1-10 entertainment scale. Yes, I did not expect anything from this seemingly-another-Vegas movie but it turned out to be outrageously funny. It lacks depth, yeah, but what the heck. When you’re stressed out, all you need is a good comedy. And this film provides two hours of temporary escape to the horror-realities outside the theater. Props for that.

It is not a dumb movie. Actually, it makes you think in many ways. It is obvious that the director made several attempts to inject substance. In a way, I’d like to believe that there was a conscious effort to present Las Vegas and what it represents through the eyes of four (alpha)males. It does not try to justify the craziness of the night in question and the so-called foolishness that the city offers nor does it criticize them. But it somehow makes you understand why these guys are these guys and that even they, despite their tough facade, are in desperate need of empowerment.

It is not difficult to just find yourself in one of those guys — dangerously struggling to get out of the mess you are in. That if watching this movie was your escape, what would be welcoming you once the film stopped rolling? The calls you avoided. The piles of work waiting for you. The family-related stress. The ugly truths you have been dodging.

And to hell with all of that, we could not regret watching the film because, sometimes, we could use a few laughs — the kind that only a tiger in the bathroom can deliver.

(I just wish Heather Graham had more screen time. And yeah, Bradley Cooper was entertaining in ways that make you salivate. 😛 )