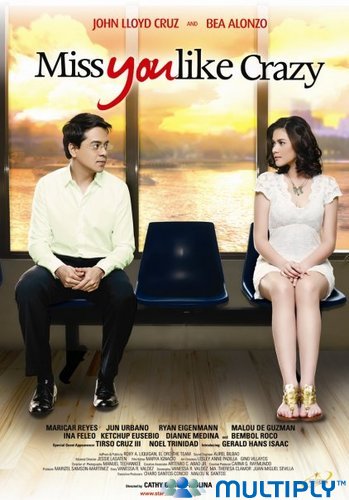 When I first heard that John Lloyd Cruz and Bea Alonzo would be doing a movie together after three years, my first reaction was “How in the world are they gonna top One More Chance?!” Not that One More Chance is a perfect film. But it was perfect for John Lloyd and Bea. It was one of the best mainstream Pinoy romantic drama movies I’d seen in recent times — well-acted, well-directed, well-shot, mature and surprisingly solid.

That said, Miss You Like Crazy is bound to be compared to its predecessor. But looking at the new movie as is, this has a lot of refreshing things to offer.

First, there was a deliberate effort to deviate from conventional Star Cinema movies and it was pretty apparent. The treatment is way different from other Cathy Garcia Molina films. For instance, there was an attempt to play with the timeline. We all know how formulaic studio romantic movies are and they seldom mess up the narrative flow. Also, how they “sectionalized” the film was not something that usual mainstream romance does. Each section is set in a different time and has its own premise, conflict and closure (but not really a resolution). These sections feel like incomplete short films but weaved together make up a good, insightful movie.

Second, the narrative veers away from the explain-it-all/show-it-all school of storytelling. When one section ends and another starts, the audience is left in a vacuum. A long time has been skipped and the audience is left wondering how much time has passed and what happened in between. It doesn’t assume that you are too stupid to assume or to discover for yourself what you missed. There’s a downside, though. It has a happy ending, yes, but that’s not the problem. The issue is how it gets there comes out of nowhere. It’s not established enough; it felt forced. It felt thought out in the last minute just so they could give the audience a happy ending. That’s the problem.

Third, the treatment and cinematography have Korean elements in it. It has that Asian feel to it. Extreme close ups, moments of silence, lingering shots, using inanimate objects as central components of the narrative development. Refreshing.

Fourth, the characters are realistic. All the characters, especially Allan Alvarez (John Lloyd Cruz) and Mia Samonte (Bea Alonzo) are so flawed, so imperfect, so human. Their fickleness and confusion are things we can see in many of our friends and even in ourselves. The relationship between the two characters is so wrong, in the first place, but that’s the kind of thing we get ourselves into sometimes.

Fifth, this is Bea’s movie. And by that I mean Bea Alonzo owned it. We all know that in all his films, John Lloyd is a scene stealer. He’s such a good actor that he manages to deliver performances so believable and effective that he always sweeps the floor with the entire cast on it. Lloydie is fantastic here, too. However, for the first time, I saw John Lloyd Cruz being outshone by a co-star and I was glad that it was Bea. Bea is a lot better than any of her co-stars here, even better than her performance in And I Love You So, even better than John Lloyd. Bea is starting to really mature as an actress and in this film, she was able to give the character its own personality with own mannerisms, nuances and quirks, reminiscent of how Claudine Barretto attacked her character in Milan or Judy Ann Santos in Don’t Give Up on Us. John Lloyd and Bea do not need heavy dialogs anymore to prove they are effective. One move, one look, they communicate.

There was some letdowns, of course. The biggest disappointment is that the story relies too much on luck. Destiny is a major “mover” in this film that it actually feels like another character altogether entering the picture to pull off a deux ex machina and me no likey. Destiny is a sweet concept yes, but I’m just not a fan.

Another big black hole is its poor editing. Seems rushed.

So, is this film any better than One More Chance? Unfortunately, no. I’ll pick One More Chance any time of the day. Miss You Like Crazy feels like a step back from the other in terms of theme, execution and entertainment value. It’s like a younger, newer version of Minsan Minahal Kita (Sharon Cuneta-Richard Gomez) and Sana Maulit Muli (Lea Salonga-Aga Muhlach) combined. And for what it’s worth, both films are truly exceptional.

But like I said, the key to really appreciating this movie is to not compare it to other films and just see it as it is. It’s a very good film, far better than any other local mainstream romantic dramas we’ve been seeing in recent times. Oh yeah, I’m comparing again. Haha.

Seriously, it’s a breath of fresh air. And for me, that’s reason enough to watch it again. You should see it, too. 😉  3.0