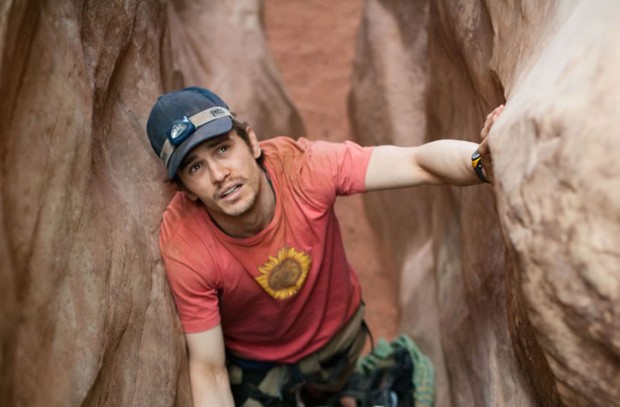 127 Hours is about mountain climber Aron Ralston (James Franco) who goes on a journey to a remote Utah canyon but finds himself trapped in a lonely crevasse after a boulder falls and pins his arm. What happens next is 127 hours of trying to survive and get out of the earthy prison.

So wait, wait, wait a minute, does that mean you’re gonna have to watch a man struggle to set himself free through the duration of the movie?

Well, yes. But thanks to Danny Boyle’s filmmaking precision and James Franco’s brilliant performance, what could have been a stagnant material becomes a journey to the soul of an individual who had been imprisoned in his solitary ways far longer than 127 hours — most of his life — and we see him break free and realize he has reasons to reach out to life, albeit with one arm.

James Franco‘s performance is central in the storytelling because there’s not much of a story. He is almost in every scene and without going anywhere, he has to win the audience over by creating a character that is distant and carefree but adorable enough for us to want him to get out of that solid rock predicament. And the Academy-nominated actor did not disappoint. He gives the performance of his life in this film, giving life to a brave character in the brink of desperation. His Ralston is real and believable as he delivers a performance overflowing with power and rawness. His face radiates the strength, the terror and the despair — all at the same time.

But Franco does not single-handedly carry this film. Danny Boyle was able to put the audience in Ralston’s shoes and see the world through his eyes. Although it is not always comfortable (or even bearable), the film encourages us to ask ourselves what we would do had we been in that situation. This kind of first-person approach works magically. Moreover, the guy sure knows how to tell a story, breaking the “trap tedium” with beautiful shots of the landscape every now and then and injecting enough humor to keep us entertained. The cinematography and editing make up for the absence of movement.

However, it feels contrived at times. Some elements are unnecessary and are too much that it hardly feels real. The thunderstorm and the water bottle toppling over feels like they were added to torture the character more as if the situation is not desperate enough.

But overall, 127 Hours may be an uncomfortable watch but it is a shame to not see this movie. Tired as it sounds, this film celebrates life and our reasons to go on living. We may not find ourselves in any similar extreme situation but we all feel trapped sometimes and it is when you’re presented with this mountain of challenges that we value what we have more. As Ralston stabs his arm, we bleed. As he runs out of water, our thirst for life shoots up. As he realizes the boulder isn’t going anywhere, the more we realize we need help. As he cuts his arm, the more we reach out to and have a better grip of our lives and everyone in it. 4.8