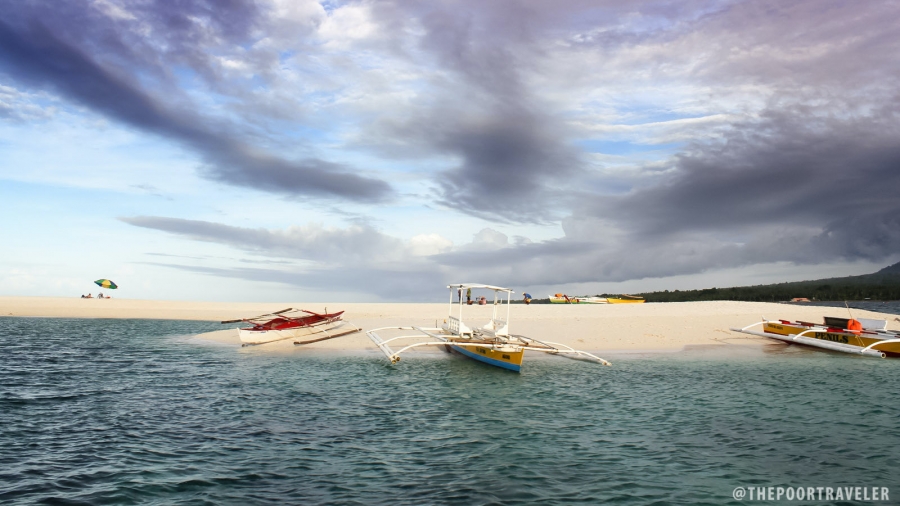 You might be thinking: Why the hell am I posting a year-ender countdown in mid-January? All I can tell you is that I had been too busy with work lately. But better late than never, aye? Too busy or too lazy. Take your pick.

2011 was my most travel-heavy year ever. Considering that I am a holiday/weekend traveler, I still can’t figure out how I managed to go places given the hectic work schedule and limited leave credits. In 2011, I somehow neglected this blog Yoshke.com so I could focus on my travel blog. Don’t ask me for a link to my travel blog; I’m not yet ready to reveal ‘coz I’m not yet proud of it. Haha. I still have a lot to learn about traveling and travel blogging. I co-own it with a partner, who handles the SEO and the more technical sides of the blog. I take care of the content and it’s social media presence.

Anyway, I’m counting down the 20 best travel experiences that I had last year. This is the first half.

20. Kayaking Around Islets in Marabut, Samar

I blamed kayaks for leaving me completely useless on my first night in Samar. Empot, a friend, had a brilliant idea of circling around the towering islets dotting San Pedro Bay. 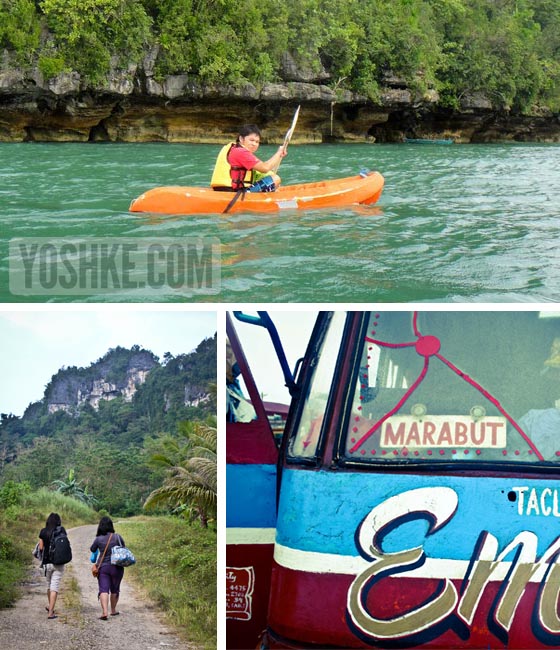 Me kayaking (top). My friends Empot and Dane walking to Marabut Extreme (bottom left). The bus we took to Marabut (bottom right)

While it was a fun and rewarding activity, we kind of forgot the fact that none of us had tried kayaking before. We were able to paddle back to our resort, Marabut Extreme Adventure, after hours albeit utterly drained out of energy. Not to mention that I was reminded that I had muscles every time they throbbed and ached.

The KL Tower and the view from the Observation Deck

It was my first time in Malaysia and we only had half a day to explore the city of Kuala Lumpur. Not enough time, if you ask me. We set foot on the Petronas Towers, the Thean Hou Temple, and the Merdeka Square. But it was our visit to the KL Tower that was unforgettable. The building’s observation deck offers a 360-degree view of the Malaysian capital from 276 meters above the ground.

Getting lost is an exaggeration but I had never been in a bookstore as big as the Ngee Ann City branch of Books Kinokuniya in Orchard Road, Singapore. I said it before, I just love the smell of new books. I love running my fingers tips on the edges of the virgin pages. 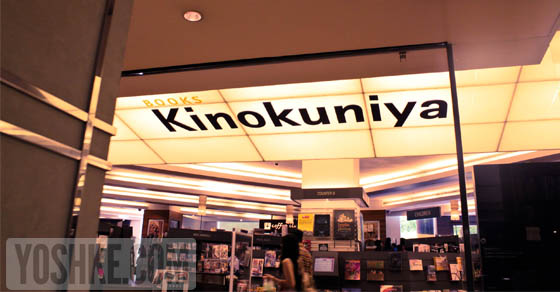 It’s one of the biggest bookstores in Southeast Asia. I had been to Singapore thrice but I never had a chance to enter this paper paradise until August 2011. I was with two other blogger friends and we decided to go our own ways as we looked for books. We ended up spending half of the time struggling to find one another. Haha.

It was supposed to be a Batangas Heritage Tour. The operative word being Heritage. But while we were having a few sticks of barbeque at one of the stalls in Plaza Mabini in Batangas City, we spotted this dainty, quirky cafe just across the street. We just couldn’t resist the little quirks and fancies of the place. It was so pink and purple. And there were pictures of Prince Harry and Prince William all over. 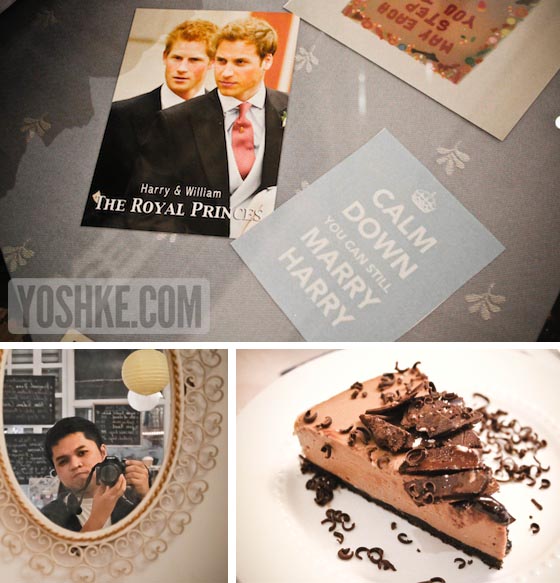 Cafe Milflores in Batangas City. And yes, that's me camwhoring in the mirror. Haha

But it was not just the ambiance. Their cakes were unique, smooth, and tasty. The service was impeccable. The staff were friendly. And there were cute customers, too! Who could resist that?

The first time I visited Leyte was in 2000; I was a high school sophomore. We stayed in Palo but I remember dropping by the Sto Nino Shrine (Romualdez Museum) and being blown away by every little luxurious artifact inside. More than a decade later, when I visited it again last February, I was still blown away. 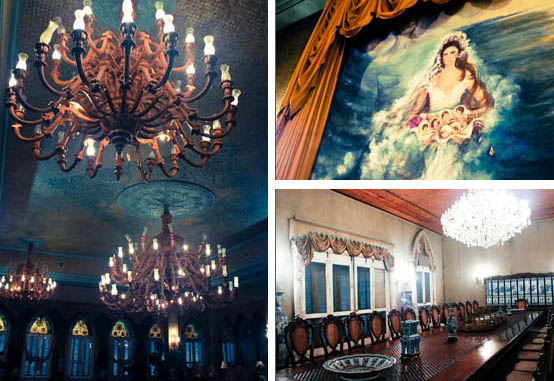 The beautiful artifacts inside the Romualdez Museum

I guess no matter how many times I visit this place, the effect on me will always be the same. Awe is the strongest feeling but they come with questions, lots of it.

I had to dig a really, really deep hole in the sand just so our rented umbrella could stand still. The wind just kept on blowing it away and we would always run after it like dogs. But that was all part of the fun. 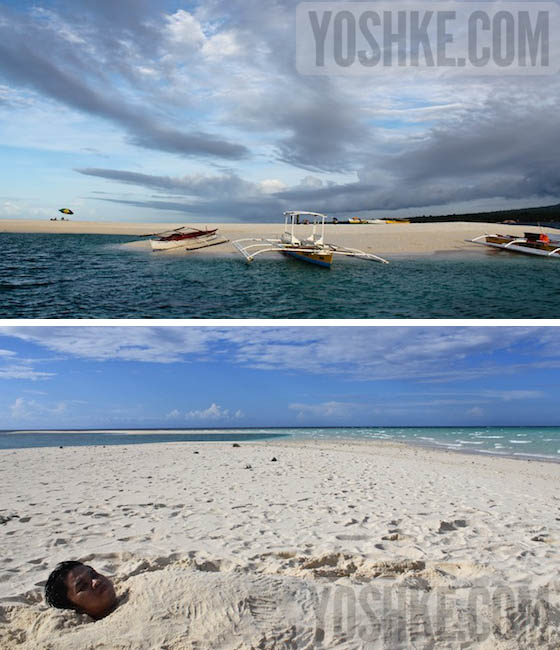 White Island, Camiguin and me, enjoying too much

In the end, I gave up on the frakkin’ umbrella and just embraced the sun. But not completely. I buried myself in the sand as I watched the violent waves slap the shore on one side of the island, and on the other, the waters were swaying gently. 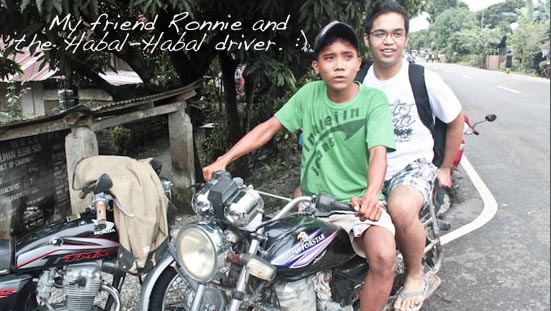 When we got off the bus at the corner of the national highway and a narrow, rocky road, and saw a line of motorcycles parked nearby, I knew we were in for a bumpy ride. Four and a half kilometers of unpaved, dirt road in the middle of nowhere. And it didn’t help that we went uphill and down more than a couple of times. I was worried about whether I would reach the destination in one piece. But it made the whole journey all the more exciting. When we finally reached the resort, the staff of Punta Bulata welcomed us with wet towels, complimentary drinks, and dashing smiles. (Dashing talaga???)

Speaking of “exciting.” In May last year, Airphil Express invited me and other travel bloggers to try their very first “advenTour.” We had a blast. Deep inside we were all scared. But once we passed the first few rapids, we just couldn’t wait for more. 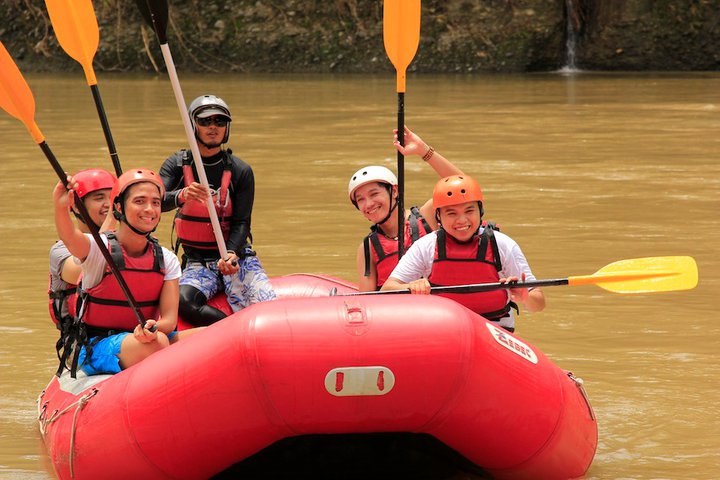 Photo by Mr. Boom Boncan who was with us on the trip

The best part was when we would jump off the boat and let ourselves be drifted by the current. It took us whole day to traverse the navigable length of the river. But man, it was the kind of exhaustion that I would beg to experience again.

The other adventure we had in Davao had nothing to do with physical strength but required another brand of courage. I’m not an adventurous eater. So when the group ordered crocodile sisig (yes, crocodile meat. yes, real crocodile meat), I wasn’t thrilled at all. I ended up having a bit, just to have an idea how it tasted like. I’m pretty sure you had heard this before but it tasted very much like chicken, except gummy. My friends liked it. I didn’t. I almost puked. I couldn’t get the image of crocs out of my head.

Now, the ostrich meat. That’s a different story. It tasted like beef but without the aftertaste. I actually liked it. But then again, I just kept on thinking about live ostriches as I was chewing that I just had to stop.

When we booked flights to Bacolod, the only thing we knew about the city was Masskara Festival, sugar, and chicken inasal. Apparently, the thought of chicken inasal was strong enough that weeks later, in June, we found ourselves at one of the restaurants in Manokan Country, sampling their famous inasal with our bare hands. It was the best-tasting chicken inasal I had tasted in my life. 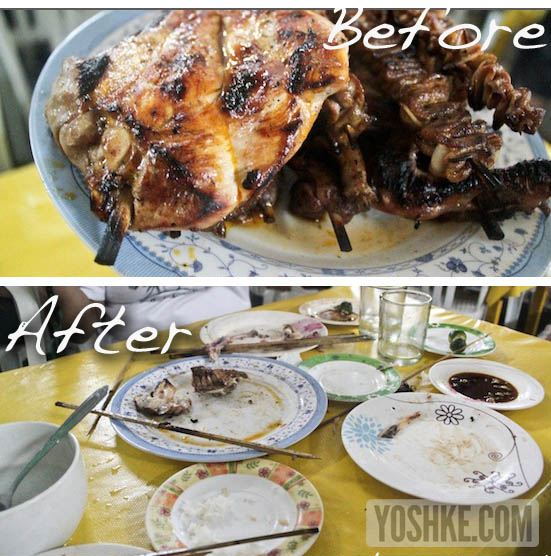 Their isaw was also the tastiest I had ever had. I don’t know what was special about Manokan Country. Maybe it was the “festive” and “all-is-welcome” ambiance of the place. Maybe it was the recipe. Maybe it was all psychological. But coming from that trip, every chicken barbeque we tried here in Manila just tasted bland in comparison.

And oh, Calea was awesome, too!

That’s it. I’ll start writing the second half of this list. It shouldn’t take long. Any guesses on what could be in the Top 10?