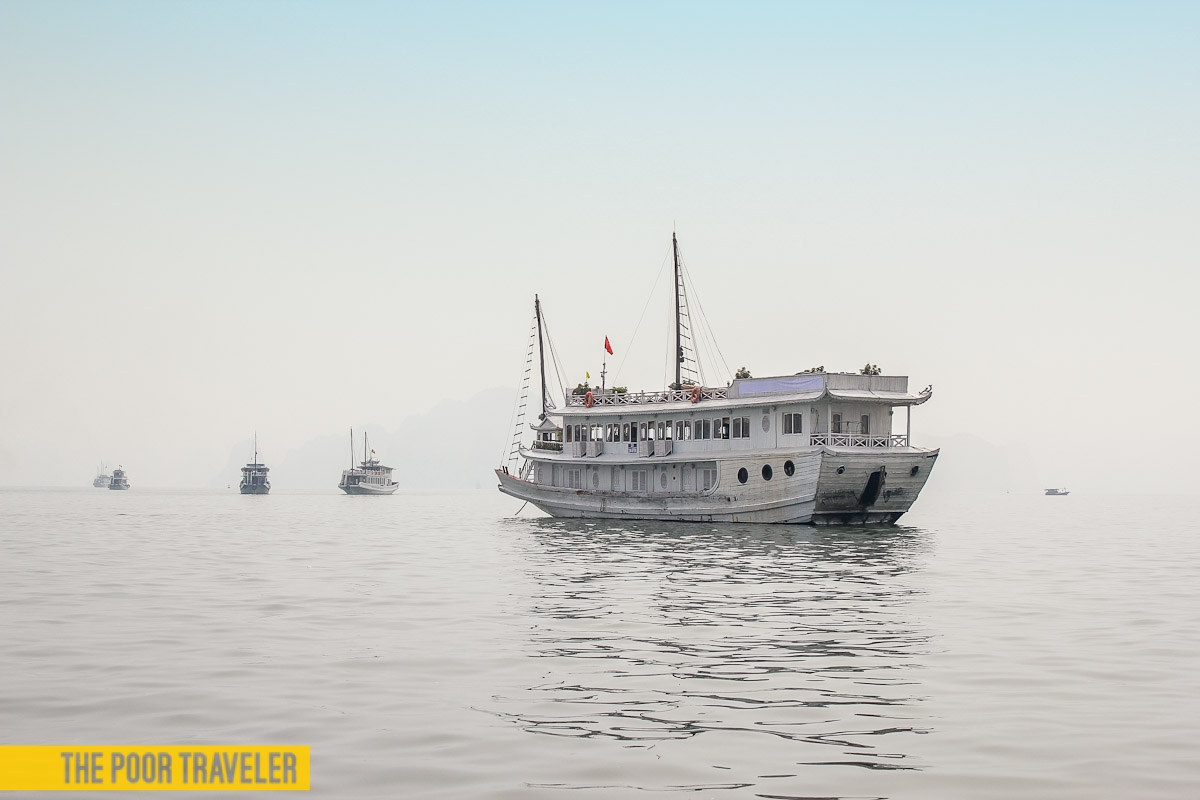 HA LONG BAY, Vietnam — “No stars tonight?” She put down her glass of pina colada and sat next to me on the bench on the top deck of the boat, floating softly in the middle of Ha Long Bay, Vietnam.

“Not even one,” I painted a faux pout on my face while picking up my bottle of Tiger Beer. ” Was hoping I could go stargazing but the clouds are not my friend tonight.”

“I know. I was planning on doing the same but what can we do?”

Her name is Carrie. Getting close to Carrie was totally unexpected. When I first laid eyes on her, I was positive she was the only one on that tour that I would not be friends with. There was just something highly intimidating about her. But in the course of this two-day boat ride, I formed a bond with her that was neither instant nor creeping. Carrie is from Chicago but she was traveling at the time with her Austrian husband, Daniel, who also had been very kind to me.

“So tell me,” she changed the subject. “Why are you traveling alone?”

“Hmm?” I heard her question all right but I just could not find the right answer. Ha Long Bay was the last stop in my month-long backpacking trip across the Southeast Asian peninsula, a perfect way to close the journey, but I never really got a chance to ask myself that question.

“Well, you told me you’d been living with your boyfriend for years, you have a great job, and you seem like a really happy fellow,” she explained. “I haven’t tried traveling solo; I don’t think I’m up for it. But you, why are you doing this?”

“To be honest,” I responded, “I have no idea.” I booked a one way ticket to Bangkok several weeks before without anything — no detailed plans, no expectations, nothing but a goal to reach Hanoi, Vietnam a month later. “I guess I just wanted to try,” I added.

The trip was not perfect, of course. There were so many bumps along the way and quite a few times did loneliness kick in. In those moments, I wanted to quit and just fly back home. But every time I found myself alone, another solitary soul would come my way and turn things around. Here are a couple of them. 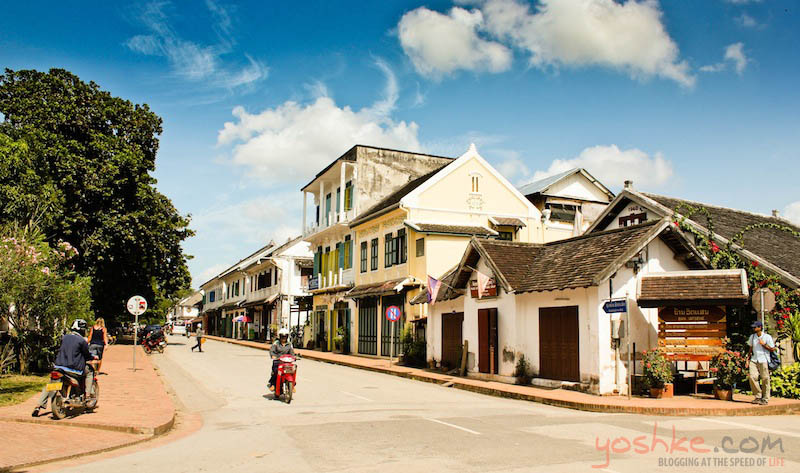 I was seated alone at the back of the van when the door opened and a lovely French woman came in. Since there was a lot of room in my row, she chose to sit next to me.

“Hello,” she said while flashing a friendly smile and I greeted her back. That was the only word we exchanged in the next fifteen minutes or so. I looked out the window and watched the green-carpeted countryside on the way to Kuang Si Waterfall in Luang Prabang, Laos. I have always been shy when around strangers and I’m not one to start conversations. Fortunately, she did.

Charlotte: Nice bag.
Yoshke: Thanks. Where are you from?
Charlotte: France. I’m Charlotte. You?
Yoshke: I’m Yoshke. From the Philippines.
Charlotte: Great.

And just like that, the conversation was over. We reached our destination and traveled back to the city without having a decent exchange of words. I guess that’s what happens when you put two incredibly shy individuals in one place.

In many parts of the tour, we had a number of short-lived conversations but nothing as remarkable as the long moments of silence that we shared. The tour ended without a real talk.

Later that day, hours after the tour, I was taking pictures of a temple in the city proper when I spotted her having a cup of shake at a fruit stall along the street.

Yoshke: (shouts) Charlotte!!!
Charlotte: (smilingly) Oh hello there, Yosh!
Yoshke: May I join you?
Charlotte: Of course! No problem. Good thing you came. You’re very shy, aren’t you?
Yoshke: That’s true. And I think you are, too!
Charlotte: Yeah, I’m always the bashful one and I’m still trying to get used to this whole backpacking thing. I’ve been meaning to ask you this. I’ll be in the Philippines next month. And I’m really excited. I’ll spend three weeks there. What do you recommend?
Yoshke: Palawan, Sagada, and Boracay.

I then explained what’s in store for her in each destination.

“I want to go to Mindanao,” she declared. The mixture of delight and surprise must have been very visible in my face when she said that.

Charlotte: You look shocked.
Yoshke: Shocked? No. More like pleasantly surprised. It’s just refreshing to meet someone who knows about Mindanao. Much more, someone who wants to go there.
Charlotte: I can imagine. My friends were like, ‘Are you sure?’ And I tell them that it’s a big, big island and it’s safe in most parts.
Yoshke: And you’re right.
Charlotte: So now, if you could just tell me the places in Mindanao that you recommend that I visit. And, of course, those that I should avoid.

It always surprises me and saddens me at the same time that “outsiders” are more open to giving Mindanao a chance than some of my Filipino friends. 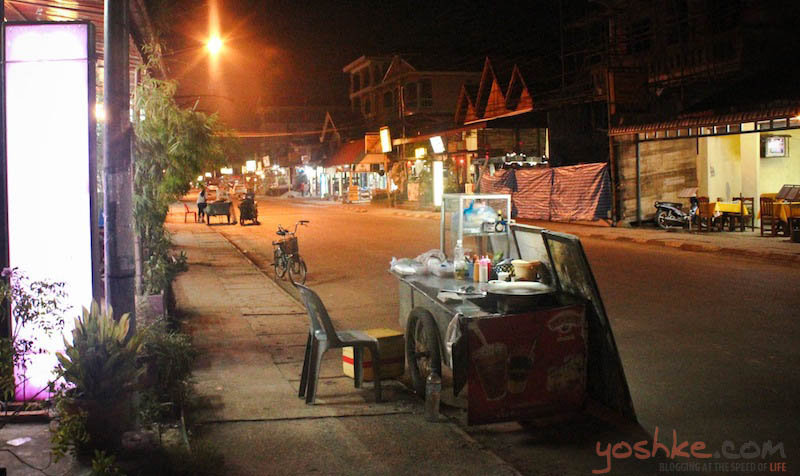 The silence that enveloped the town center of Vang Vieng in Laos was bordering on eerie and it came as a shock, to say the least. I was expecting a party destination with bars and pubs brimming with drunk tourists and filled with dance tunes. What I saw was almost a ghost town. Maybe it was the off-season or it was mid-week. But the restaurants were nearly empty and the streets abandoned. It was late at night and I decided to just head back to the hotel. On the way, I saw a middle-aged man seated alone in front of an adjacent hotel.

“Would you mind if I join you?” I asked.

He’s a retired Australian Navy officer who had been traveling around the world for quite some time now. The bulk of our conversation was about his favorite places in the world, mostly in Southeast Asia.

Dave: I love Laos. And I love the people here. I bet you find them too quiet but they’re nice.
Yoshke: Well, I have not had any bad encounter here so yes, I agree.
Dave: I love Pinoys, too. I lived in Olongapo for two years and I had the pleasure of checking out some of the islands and the mountains. The Philippines is fantastic. I love Sagada, Subic, Batangas, and Dumaguete. And you’re a very happy people. You’re the friendliest! And probably the loudest!
Yoshke: I take that as a compliment, so thank you.

I laughed while I tilted my bottle for a quick beer toast.

Dave: You know the one thing that I don’t like so much about the Philippines? I’m not homophobic but when I was there, the gay guys, mostly ladyboys, just kept on following me around.

I squinted my eyes and threw him an inquiring stare.

Yoshke: What do you mean?
Dave: I mean, literally. They followed me around in the streets. In the first week, it was kind of amusing and somewhat flattering, I loved the attention, but when the novelty wore out, it was getting frustrating. They would follow me around and ask for my name and try to flirt with me. And even when I told them I didn’t swing that way they would not budge. I’m not even goodlooking! I’m old, grey-haired, and stocky. You know, I’m all for gender equality and I respect everyone regardless of sexual orientation, but it was the one thing that I just did not appreciate so much about my stay there.
Yoshke: Well, for the record. I’m gay. But I did NOT join you here to flirt.

I picked up my beer and had another drink. He did the same.

Dave: Yosh?
Yoshke: Yes?
Dave: I hope I did not offend you.
Yoshke: No, no.
Dave: You’re quiet.
Yoshke: Honestly, I just don’t know how to react to that.

His fingers pecked the side of the table while his eyes turned skyward.

“Let’s talk about something else,” he proposed. “Ever been to Australia?”

“So tell me, why are you traveling alone?” Carrie leaned on the backrest of the bench and put her feet on the railing of the upper deck of the boat. I met Carrie and her Austrian husband, Daniel, on the way down from the viewing deck at Dảo Ti Tốp, one of the two thousand islands off the coast of Ha Long Bay in Vietnam. Since then, we had always engaged in long talks. But the one we had while watching the other boats that evening was the longest.

Carrie: I haven’t tried traveling solo. I don’t think I’m up for it. But you, why are you doing this?
Yoshke: I have no idea. I guess I just wanted to try.
Daniel: So, how are you liking it? How different is it from traveling with friends? Do you ever get lonely?
Yoshke: It gets lonely sometimes. There have been highs and lows, but I guess that’s part of it. The one thing that I love about solo travel, though, is that I get to meet a lot of people. I was forced to be more open and more sociable.

Carrie smiled at me as she took another sip of her pina colada.

Yoshke: I mean, I don’t think we would ever share a word if I were with my boyfriend or with my friends.
Carrie: That makes sense. Come to think of it, I haven’t made that many friends on the road because I always travel with this guy here!

Carrie turned to Dan and pinched his right cheek.

Carrie: We never really got to sit down and talk to other tourists like this. I approached you this morning because I was very interested about blogging when you were talking to Will (a British guy with whom I shared the cabin). We should try to be more gregarious moving forward.
Daniel: This is your last stop, right? Will you do this again? Traveling alone across countries?
Yoshke: Oh, definitely!!!
Carrie: You sound absolutely sure. Why would you do it again? I thought you just wanted to try and then that’s it.
Yoshke: At first I didn’t know what to expect but now that I had a taste of it, I understand what makes it so enjoyable.
Carrie: And that is?
Yoshke: The people. I have met a lot of people. Most of them are fantastic and some not so much but I’m still glad our paths crossed. It’s the people I met and the friends I made that made this trip truly special. Imagine, if it weren’t for you guys, I would have been sitting here, painfully waiting for the stars to show up.

Carrie raised her glass and offered a toast for three things: for that one-way-ticket to Bangkok, for our hour-long conversations on a boat in Vietnam, and for all the people I have met in between.

“And to solo backpacking and traveling in general! Cheers!” added Daniel as the sound of glass clanking broke the silence on our boat drifting under the starless sky.