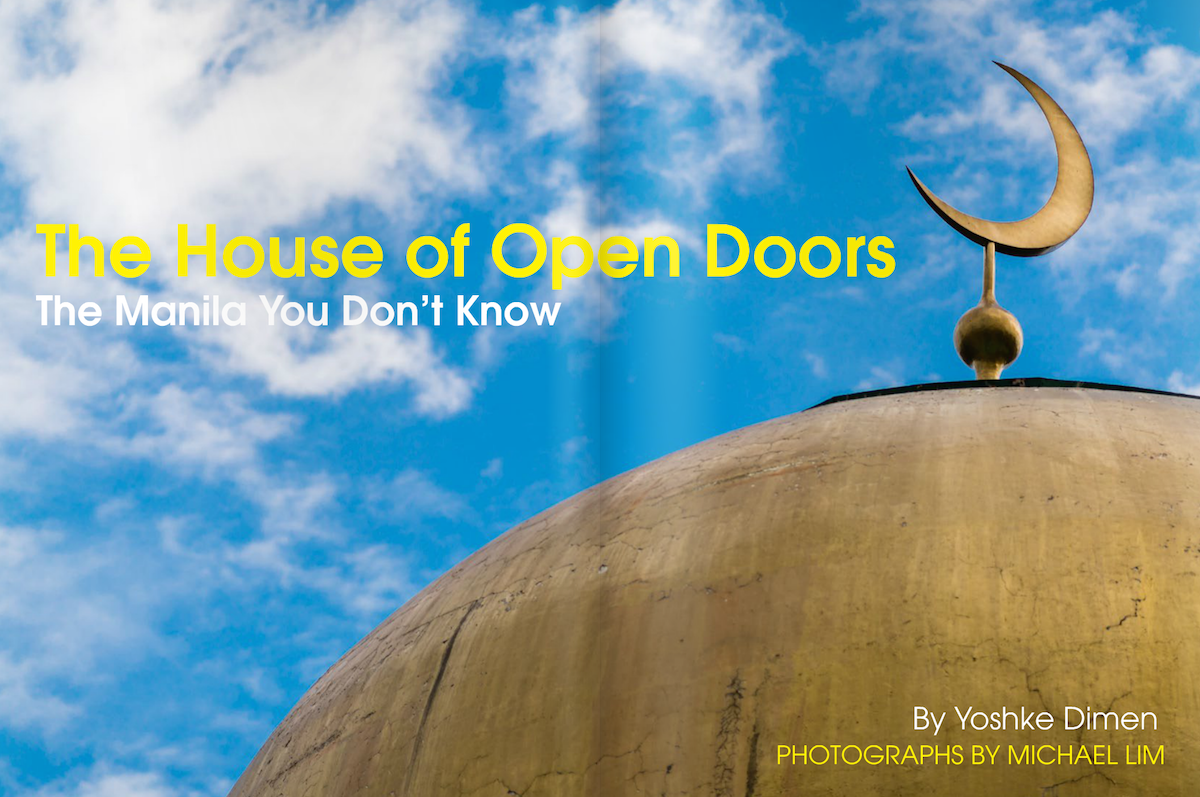 MANILA, Philippines — Guidebooks paint two-dimensional portraits of Manila: Intramuros here, Chinatown there, traffic everywhere. Online accounts reveal all her glaring flaws: she’s noisy, highly disorganized, a little suffocating, and totally insane. Yoshke Dimen takes a leap of faith in this sorely misunderstood megacity in search of her good side and finds that only those who look past her sins get to see her virtues.

Manila always pulls a shocker. This time, I am not sure what is more surprising: that the cab still has not inched forward or that the driver, who’s asking me to describe my bedroom, speaks faultless English. And with an accent, too. Australian, if I’m not mistaken.

How our conversation ends up in the nitty-gritty of my personal space is a long story, but it started with a frustrated comment about Manila’s chronic traffic problems. Confused? Welcome to the club. But he has a point, trust me.

Rush-hour Manila, where every commute seems like an act of penance. I step out of the vehicle to join the procession of young professionals, all straight-faced as if silently praying they make it on time. Before the driver takes off, he does something familiar: he touches the crucifix of the rosary dangling from the rear-view mirror and makes the sign of the cross.

You already know Manila as a city that is predominantly Christian or a land of impressive centuries-old churches. But Manila does not turn her back to those whose beliefs differ from most of her children’s. Throughout her long, rich history, she has cradled, sheltered, and nurtured many other cultures and faiths. The Manila you don’t know is a sanctuary, a melting pot, and — even when the non-stop honking of buses and jeepneys proves otherwise — a champion of peace.

How is the Philippines connected to the Holocaust? I find the answer at the heart of Makati’s Central Business Distict. Who would have known?

I turn onto H.V. Dela Costa Street, your typical city lane at first glance. But in between corporate towers and embassy buildings are inconspicuous pockets of transcendence. Reminiscent of Singapore’s Telok Ayer and Malacca’s Harmony Street, Dela Costa is flanked by several places of worship including the Church of Latter Day Saints, International Baptist Church of Manila, and Our Lady of Guadalupe Chapel. The most curious, however, lies behind a silver metal gate that bears an image of a menorah. Here, standing before me, is the only synagogue in the Philippines.

The center of the tiny Jewish population in Metro Manila, the Beit Yaacov Synagogue is a complex that also houses a Mikveh (ritual baths), a kosher kitchen, and the largest Jewish library in Southeast Asia. Manila’s Jewish presence can be traced back to the early 16th century. The first documented Jews in the country were brothers Jorge and Domingo Rodriguez who, after fleeing the Inquisition in Spain, were tried and convicted in Manila for practicing their religion. When the Spaniards left, Manila became more welcoming.

When Jews in Europe faced the threat of extinction, refuge was not easy to find. But President Manuel Quezon’s policy opened the gates of the city and saved more than 1300 Jews from Nazi Germany.

“At the request of the Jewish community in Manila, the government issued visas and permitted more than a thousand European Jews to enter the Philippines,” Rabbi Eliyahu Azaria shares in a letter posted on the Jewish Association of the Philippines portal.

It lasted not very long. The claws of war got hold of their second home, too. The Japanese occupied Manila, and Temple Emil, the country’s first synagogue, was reduced to rubble like the rest of the city. When the war ended, most of the Jews returned to the United States or moved to the newly founded state of Israel. Some stayed and built the Beit Yaacov Synagogue, which was moved from Manila to Makati in 1982.

It is easy to forget how much influence Indian culture has on our own. But all it takes is a simple conversation, and you’ll see that it is there. Tagalog carries many words of Sanskrit origin: asawa, diwata, budhi, mukha. Still, Manila’s Indian community is barely known to its inhabitants. Ask any guy on the street where Chinatown is and he will point you to Binondo. Ask where Little India is and he’ll probably point you to, well, India.

United Nations Avenue in Paco is Manila’s Little India. With no intricately sculpted, vibrantly painted gopuras peaking on its skyline and with fewer establishments lining its streets, it is much more subtle than those in Singapore or Kuala Lumpur. If anything, the street’s main temple wears a minimalist architecture. Founded in 1929, Khalsa Diwan Gurudwara is the oldest Sikh Temple in the Philippines.

The two-story gurudwara features a Darbar Sahib, the main prayer hall, and a langar, a free kitchen. The temple welcomes and invites people of all faiths to sit down and dine on the floor together. Guru Nanak Dev Ji, the founder of Sikhism and the first Sikh guru, established the langar as a way of upholding equality, regardless of religion, race, or social status. This free kitchen has offered free meals to many less fortunate locals.

At the end of Mahatma Gandhi Street, just a short walk away, is a Hindu Temple, serving the rest of the district’s Indian population.

I continue my journey by jeepney to Quiapo to get acquainted with another settlement whose roots run so deep yet so overlooked that it barely gets a dot on the tourist map. I alight right after Quezon Bridge and turn onto a narrow alley. Finally, I find the welcome I have been looking for: “Ahlan Wassahlan,” affixed on one face of the arch that ushers visitors to what many refer to as Muslim Town.

Not too far from here, on Globo de Oro Street, rises Masjid Al-Dahab, crowned by a gold-painted onion-shaped dome that gives it its name (the Golden Mosque). It combines Islamic architecture with Filipino art in the details. Its walls showcase the okir, the Maranao folk design that uses geometrical and floral motifs, among others. The largest mosque in the capital, it can accommodate up to 3000 worshippers.

The mosque did not take shape until 1976, but Islam is one of the oldest religions in the Philippines dating back to the 14th century. When the Spaniards, led by Martin de Goiti, came to the city, they were greeted by a Muslim ruler, Rajah Sulayman. Manila then was an Islamic city-state with strong diplomatic ties with the sultanates of Sulu and Brunei. However, centuries of colonization and oppression changed the cultural and religious landscape. Today, Manila’s Muslim population is now concentrated in Quiapo.

As I make my way back to the main road, I take a good look at the magnificent Minor Basilica of the Black Nazarene, a Catholic church on the other side of the street. As I stand in between two houses of worship that have co-existed peacefully, it all dawns on me.

Sure, Manila lives in a home with an altar, a Bible, and perhaps framed images of San Lorenzo Ruiz and San Pedro Calungsod on one wall. But that’s just the part of the house we immediately see. In the next room is a Quran, next to a prayer mat, neatly rolled up in a corner. In another room, candles wait for the next Shabbat. In the past, some rooms may have been closed shut with metal locks from the West, but Manila keeps them open when she can, when her hands are not tied.

Finally, I understand the conversation I had with the taxi driver. He had a distinct accent. Apparently, he lived abroad for decades. “I had a comfortable life there, very comfortable.”

“Why did you return?” I asked curiously. “Manila is a mess. The traffic, the pollution, the corruption. Why come back?”

“Describe your bedroom,” was his non-answer. “Is it always clean and organized?”

Hell no, I said. It doesn’t even have a bed, just a futon on the floor. It is in a state of disarray you would think it is where typhoons are born.

“If it’s so messy, why do you always return to your bedroom at the end of each day?”

“Because it’s MY bedroom.”

The driver nodded, gave me that look, and smiled. He never said a word about the subject after that, but he had said enough. No matter where you’re from, what you believe in or which god you pray to, Manila accepts you and makes room for you. She becomes your city, your home. And whether or not you stay with her, she stays with you. You may not know it now, but she’s the kind of city you can always come home to.

On Assignment: Paris is a contest by KLM Royal Dutch Airlines in cooperation with Digital Photographer Philippines