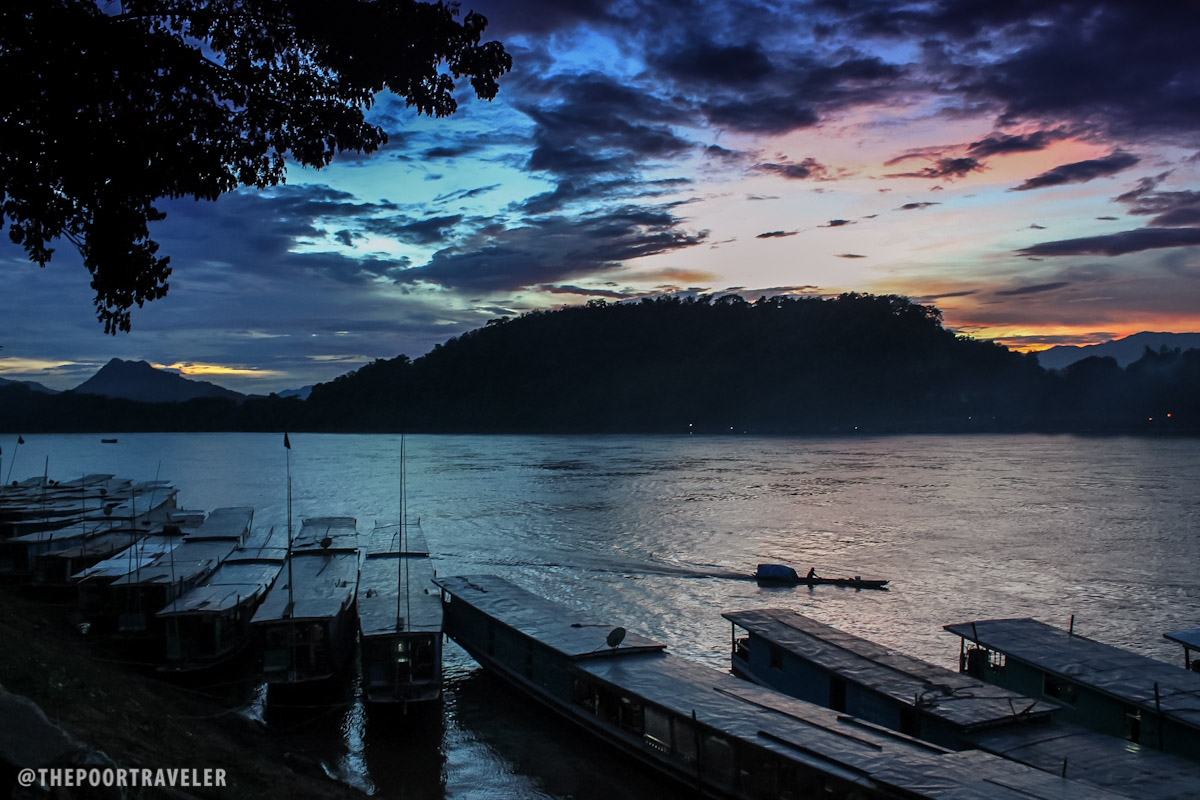 LUANG PRABANG, Laos — “To the city center,” I say to the tuktuk driver. The bus from Vang Vieng arrived in Luang Prabang much later than scheduled and I did not anticipate reaching the city at this time. It’s already evening, and my awkward social qualities made sure I didn’t make any friends during the 7-hour trip. So here I am in another foreign city, alone, and wandering in the dark.

“Where exactly?” the driver wants an answer fast. My brows meet as I start to rummage through my head for any place that I could go to. I have not even booked a hostel yet. Sure, I had read about the city before, but for some reason, my tired mind is failing me. Perhaps it’s the hunger. Perhaps it’s the exhaustion. The other passengers begin taking their seats inside the tuktuk and I need to say something.

“By the Mekong River,” I answer without thinking. It’s the only place that came to mind.

The Mekong is a vital source of sustenance for the people of Luang Prabang. The longest river in Southeast Asia and the twelfth in the world, it runs from China’s Qinghai Province through the eastern part of Tibet down to the Southeast Asian peninsula, forming parts of the boundaries of Myanmar, Laos, and Thailand, then cuts across Cambodia, and empties to the sea in the southern tip of Vietnam. It has supported many cities, ancient and modern, that rise on its banks. One of them — Luang Prabang.

The tuktuk drops me off by a lane of restaurants on the banks of the Mekong. I had not had a decent meal since the bus left Vang Vieng, and it looks like the river would also provide my strength, at least for the night. The scent of fried fish leads me to an al fresco restaurant. There is no view; pitch darkness envelops the site. But the sound of blenders accenting the soft hum of the water current makes me forget that I just spent hours in a bus alone and famished. The Mekong is here. Hiding in the dark, but it is here.

The next day, after a quick breakfast, I walk down the road parallel to the river. The sunlight touches my skin softly and the wind toys with my hair. Bicycles run past me in impressive speeds. I traipse on the concrete road without any agenda, but a narrow staircase seems to give me one. I walk down the stairs and find myself looking at a confluence. From where I stand, I can see the Mekong mingle with the Khan.

I step on the supple ground with utter caution. Holding on to the plants that adorn it, I traverse the bank to have a good view of the two rivers’ rendezvous point. The two rivers cannot be any more different. The Mekong is wide and intimidating, the Khan narrow and sedating. Verdant hills flank both rivers, lumps of clouds swoosh overhead, and slow boats ripple on its muddy water.

I search for a good place to watch the rivers and find it in the form of a flat rock, tucked in one corner. I sit and take it all in. Here silence is a companion. I can hear my breathing clearly. Breathing is much easier here. “Nothing” is such a positive thing. This will be my secret place in Luang Prabang, and this humble boulder my throne. 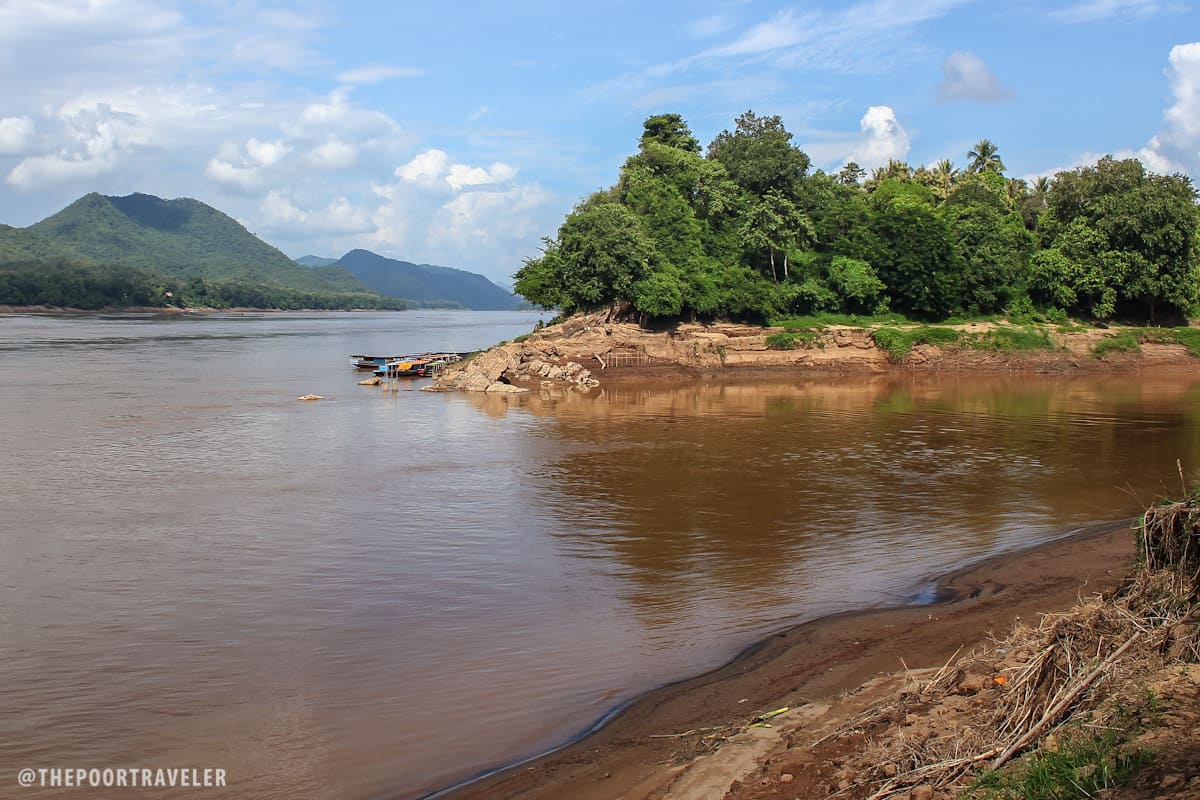 Where the Mekong meets the Khan

The tang of solitude is an acquired taste. It took me weeks before I finally embraced it. I wrestled with loneliness from the beginning of this trip. But here in Luang Prabang, I am happily alone, drifting around aimlessly for days.

At night, my favorite spot is the edge of Utopia. A laidback lounge perched by the Nam Khan, Utopia allows a spectacular vista of the stream even at night, when the moon gives the water a faint shimmer and the wind is almost as cold as the bottle of beer in any thirsty traveler’s hand. The Khan is witness to the bonds formed at the viewdeck. Hundreds, thousands of travelers have stayed here and shared stories. The river is a silent listener.

Every morning I have a hearty breakfast beside the Mekong. Every morning I sit on that corner rock where the Mekong meets the Nam Khan. On my fourth day, I come to see the mighty river on a late afternoon for the first time. I’ll be leaving Laos in a few hours, but I am not ready yet. I feel like this river still has something to show me. I feel like I’m missing something. I count the boats docked at the pier, forming a rickety set of broken wooden piano keys that swayed gently.

And then, it happens.

The sun hides behind the wall of black, the afterglow dwindles, and the sky plays a symphony of colors that the river reflects gloriously. In this city where I made peace with solitude, these two rivers have been my two constant companions. And they are saying goodbye. For now. 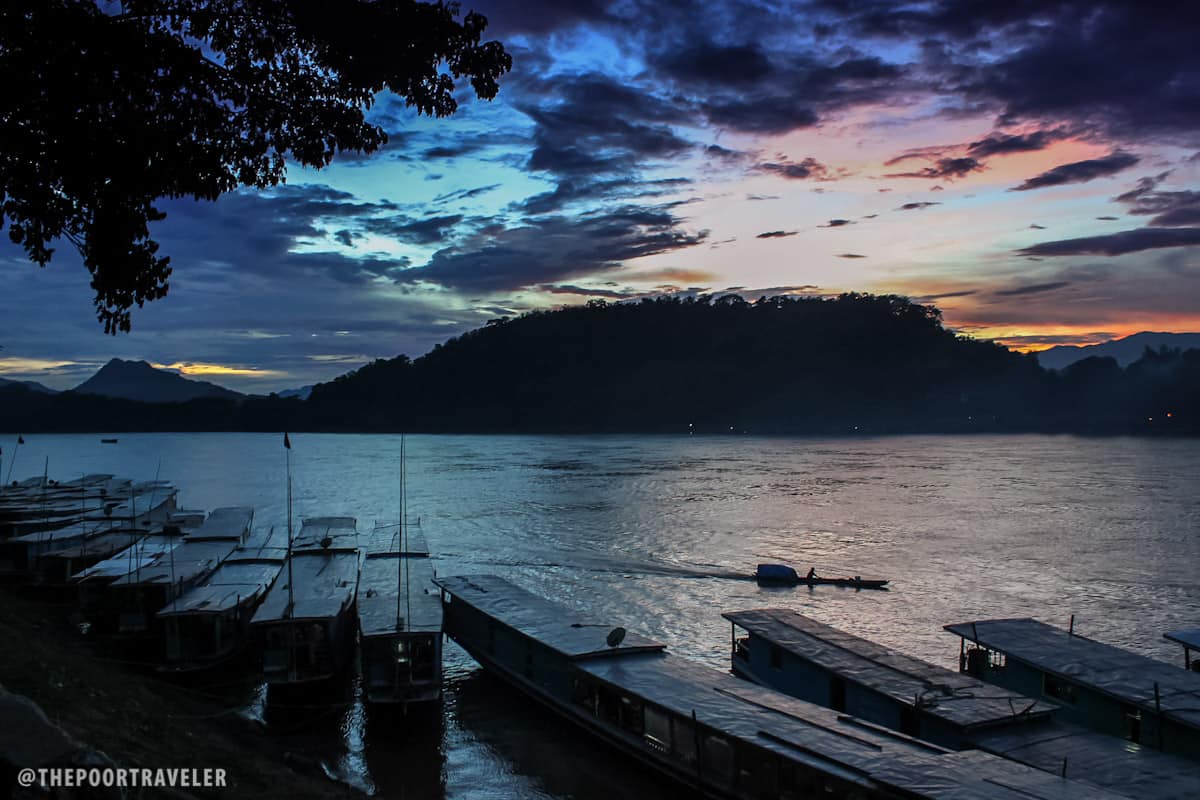 The sunset blowing away the blues at the Mekong River