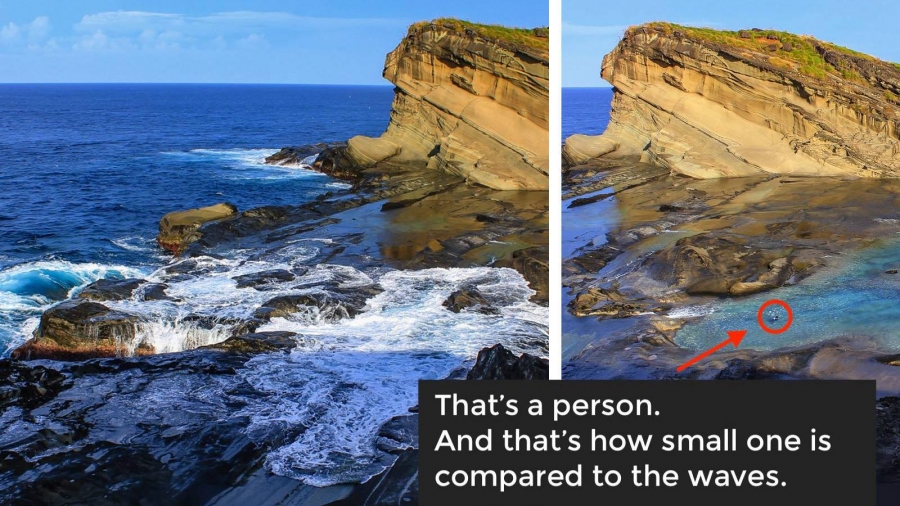 BIRI ISLAND, NORTHERN SAMAR, 2012. Our last stop was the site where Magasang and Magsapad rock formations stand. My friend Ces and I climbed to the top of the cliff and watched the sea slam the rocky shore with one giant wave after another. Biri Island lies where the San Bernardino Strait meets the Pacific Ocean, and we were amazed by the sheer size of the waves. Every once in a while, a giant wave would come crashing, making a splash so powerful that the water would overflow far inland. Funny that I use the word powerful now because at the time, all I could think of was how fun it must be to frolic in the water that spilled over.

If you’ve been to Biri Island, you know that between the rock formations is a natural pool that catches the overflowing water. Swimming is allowed in the pool. In fact, when we arrived, locals were taking a dip. By the time we came down the cliff, the swimmers were gone. We had the pool to ourselves! We decided it would be a great way to end our day.

After swimming for several minutes, I climbed up to the space between the sea and the pool and saw a monstrous wave coming. Excitedly, I shouted, “CES! MAG-READY KA NA! AYAN NAAAA!”

When it hit the shore, I realized how badly I underestimated the size and power of this wave. What I expected to be a timid overflow of water felt like a surge snatching me and throwing me straight into the pool. The force created a whirling motion in the water, with me along. One side of my body hit the edge of the pool before swallowing me whole. I don’t remember how long it lasted, but I was able to get out of the water, trying to catch my breath.

The first thing I did was look for Ces, who was nowhere to be found. I looked around; she wasn’t there. Soon after, she emerged from the water, facing the other way, arms swinging, trying to get a hold of something.

Then I realized, I WAS NAKED. THE FREAKING WAVE TOOK MY SHORTS!!! (HAHAHA, sorry for the mental image. Lunch pa naman!)

I found it not too far away.

We decided we had enough “fun” for the day so we quickly abandoned the place laughing so hard and probably traumatized. Thankfully, we got away with only scratches on fingers and arms.