I am an anime lover. It’s Japan’s greatest contribution to mankind. Hehehe. And in our family, I am the only one who appreciates the beauty and art of anime. And among my university friends, it was only Reen whom I could talk about it so passionately with. (Excluding hentai, that is. Otherwise, I’d have to say Vince and Nep, too. Hahaha.) Every night, you’d find my entire family together in the living area watching primetime drama but not me. I’m usually upstairs, watching something else — CNN, National Geographic, HBO and yes, Animax Channel. My brother cringes whenever he finds me watching anime, insisting that I would not get anything from such crap. Those remarks I often shrug off. Anime is not crap. In fact, nothing else has tackled five of the concepts that I value the most better than my top five all-time favorite anime shows.

5. Love | Let’s start with the most popular — Sailormoon! Who doesn’t know Sailormoon? It tells us a very unrealistic story (you know, trying to save the solar system and all in the name of, er, the moon) yet we often find ourselves relating to most of the characters. This is because Sailormoon is all about the most popular concept in pop art, love. And it’s not just romantic love (Usagi and Mamoru), it emphasizes love for friends and family, as well, and all the major components of love — passion and trust.

4. Change | We hear this over and over again: The only thing that doesn’t and won’t change in this world is change itself, the entire concept of change. It’s just a matter of the way you change and the path you choose, and the person you want to change into. Samurai X is one of the greatest stories about change. How Kenshin chooses to forget about his former self, Battosai, the legendary manslayer, to become a better man. Samurai X wants us to realize that we are not defined by who we were or who we used to be, but who we are and who we choose to be in the future. The past should not be a standard for humanity. Aside from change, Samurai X also focuses on honor, a value I also treasure.

3. Peace | Being a diplomat-wannabe, it’s just apt that I value this concept. Ahaha. And the best anime show that discusses this is also the most entertaining for me, God(?) Save Our King. It is about a world in another dimension where humans and demons live together — but not necessarily in harmony. It debunks the whole idea that demons are fallen angels with bat-wings and horns. Demons are depicted as very human-like but with supernatural powers (to control any of the elements: fire, water, earth, and air). The setup is very ironic for in that world, humans hate demons just for being demons. And demons hate humans for being evil. (Ahihihi) There’s been several wars and it seems like it won’t be over yet. Until the protaganist, Yuri Shibuya enters the picture. He is from OUR world, and was proclaimed king of the demon world just because he was in all-black attire (his school uniform) and he has black eyes. Yuri doesn’t like the idea but chooses to accept the job anyways. As king, he learns about the complexities of war and the value of peace, and struggles to mend the broken bonds between humans and demons. I have already posted an entry about this program a year ago. Click here.

2. Truth | The two sides of my brain are still arguing if truth is really relative or absolute. But no matter how you look at it, truth is an important concept that everyone must value. I can’t think of any show that puts much emphasis on this other than Detective Conan. And Detective Conan is pretty entertaining, too. The best episodes as far as I’m concerned include the Film Club Reunion Murder Case where a killer dressed as mummy attacks them; the Bloody Venus Murder Case where a band vocalist is poisoned; and the Library Corpse Search where Conan and the other kids look for a dead man hidden somewhere in the library. Aside from truth, justice is also tackled. 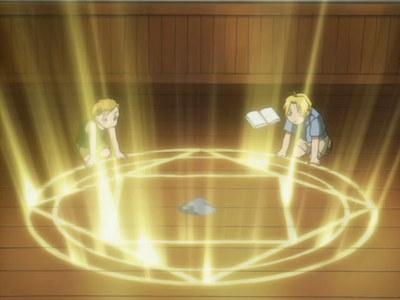 1. Life | Fullmetal Alchemist is my all-time favorite anime. And to think that it’s number 1 despite the fact that I still haven’t finished watching the series, this must be something. This show strongly reminds the audience how important and sacred life is, especially human life. The story revolves around the first rule of alchemy “You cannot gain anything without losing something in return,” and the two lead characters, brothers Edward and Aphonse Elric, learnt it the hard, cruel way. It also discussed major issues that humanity is facing today — war, genocide, racism, etc. It also criticizes science and technology and questions its limits. The best episode for me so far is the one where Nina, a lovely 4-year old girl, was turned into a dog hybrid by her father with Alchemy. That episode made me cry all night long. If there’s one thing that this show taught me, it’s the fact that the human body is made up of chemicals that are easily available and pretty cheap — a little more than $20. But the soul (being the memories, emotions, experiences, bond we had with a person) is priceless. And so, we have no right to mess with human life.