The American Film Institute has just released an updated version of their 100 Greatest American Movies list. And Ayn has just completed her Top 70 Favorite Films. So I guess it’s my turn to publish my own list — my Top 50 All-Time Fave Films.

Hmmm. Why Top 50? I don’t know. It was originally 40. Then changed it to 44 to give slots to a few films I had forgotten about. And now it’s 50 because I broke some of the tie-ups — you know, multiple films sharing one rank. So now it’s final. Fifty. Final. Promise. But then of course, when I change my mind again, blame my fickle-ness. Whatever.

Anyway, a few notes: I haven’t seen Schindler’s List, Memento, A Clockwork Orange and Requiem for a Dream yet so don’t expect to see them on this list. And remember that this is not a countdown of the best films in history but my personal favorite films — movies I enjoyed the most.

50. The Lord of the Rings – Trilogy (2001-03)
Genre: Epic, Fantasy
Director: Peter Jackson
Based on: The Lord of the Rings by JRR Tolkien
Starring: Elijah Wood, Viggo Mortensen, Andy Serkis
Plot: A young Hobbit has been entrusted with an ancient Ring. Now he must embark on an epic quest in order to destroy it.
Top Critics’ Average Mark: 98%

To be honest, when the first film The Fellowship of the Ring was released, I wasn’t excited. The whole Lord of the Rings thing did not appeal to me in any way. Not even Orlando Bloom. Haha. I even said that the only thing that I might like about it was Cate Blanchett. I never read the book. I never even bothered to see this in a theatre. I only began liking it when I watched The Two Towers, which became my fave film in the trilogy. And since then, I’d considered this trilogy as one fantastic film.

OK, film critics, you can cringe now. The film that every film organisation in this world considers The Greatest Film of All Time is only my #49. The film is brilliant. But sadly, I didn’t make any connection to the story, and that’s always a big thing for me. I need to relate. But it is a very entertaining and artistic film. And yeah, classic. Might really be the greatest film ever made. Every scene and shot was well-thought out. Every element means something. Every camera angle. Every prop. Every movement. Every space used, and unused. Greatest. But maybe I prefer something uh contemporary.

“Natural law. Sons are put on this earth to trouble their fathers.”

This is the first of the many (as in MANY) violent films in this list, if Lord of the Rings isnt violent enough. Ironic really, for a diplomat-wannabe, I adore gangster and war films. Hehehe. Anyway, I’ve always had a fascination with father-and-son stories. And this movie is one of the few extremely moving tales set in a very violent era but is able to focus on the characters. Although gangster, this is a very, very emotional movie. And then of course, Tom Hanks is just freakin’ good. (And Jude Law, too, but you’d hate him here. He’s one of the bad guys.)

“Making a film is like a stagecoach ride in the old west. When you start, you are hoping for a pleasant trip. By the halfway point, you just hope to survive.”

The greatest film about filmmaking ever made, Day for Night (La Nuit Americaine) is one of my ultimate idol French New Wave director Francois Truffaut‘s biggest contributions to mankind. Ehehehe. This is a comedy about a film production where everything goes wrong. It’s a comedy and it’s being-funny is very, very natural. And realistic. I was with my friends who were all Truffaut fanatics when I watched this, and it was the most entertaining film we watched together. I especially enjoyed my friends’ side comments on scenes like one character just died all of a sudden, or when the damn cat won’t cooperate with the crew. Haaay. Nostalgia.

This is one Pinoy comedy that I am very, very proud of. It presents the struggles of the youth today (although a little stereotypical) and weaved those lines of action into a one complicated narrative spectacle. With a powerhouse cast, beautiful soundtrack, and off-the-hook screenplay, this movie tells how life is seen by different people, how we all strive to live our lives the best way possible and how our actions affect even those we do not know exist. One movie that every young Filipino should see.

“Just because you are a character doesn’t mean you have character.” I can barely remember this film now. I remember it was very talky. I remember Uma Thurman looked hot. I remember Samuel L. Jackson was very funny. I remember I enjoyed this. I remember I liked it so much. It’s hilarious and action-packed at the same time. Although I’m not really into talkies (like all of Quentin Tarantino‘s films), I still loved it. Damn. Why can’t I remember? I have to watch it again. [Edit: I watched it again last night, and yeah, I remember everything now. It’s really wildly entertaining.]

“How do you keep them out, when they’ve already invited themselves in? Sooner or later, they will find you.” 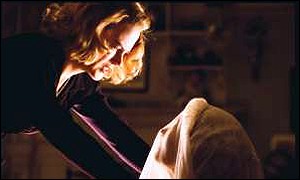 The first of the numerous Nicole Kidman films and one of the two horror movies in this list. I’m sorry M. Knight Shyamalan, but I enjoyed The Others better than The Sixth Sense. Although if I extended this list (say, Top 100), Signs and The Village would’ve made it. Anyway, The Others has the same twist as The Sixth Sense‘s but the twist was revealed much better in this Kidman starrer. Shot entirely in a studio in Spain, this is my all-time favorite horror movie. Oh, Tom Cruise is one of the producers. This horror flick is so effective, after I watched it, I really had to check if I was really alive or just an assuming ghost. Creepy.

“Music was his passion. Survival was his masterpiece.”

The first war film in this list, The Pianist is different from all the other typical war films because it is character-driven. The war is merely a setting here. It follows the journey of a Polish Jewish musician trapped in a very hostile Holocaust period (World War II). Yeah, I know. There’s been too many films about the Holocaust already but this one is really one of a kind. (Maybe because I havent seen Schindler’s List yet. The damn DVD won’t play.) This was where I noticed Adrien Brody, who would later become one of my most adored Hollywood actors. And he won an Oscar for his performance here. Yebah!

“The river has many depths. Let it wash over you.” I’m not really a Clint Eastwood fan. (In fact, I never did like Million Dollar Baby.) But this… I sooo love this film. Perhaps it’s the depressing ambience of the film. Or Sean Penn‘s perfect performance. Or that I was able to relate to one of the characters (guess who? haha). Or maybe it’s the concept of broken friendships and trusts. Whatever it is, one thing is for sure, I love this film.

If there’s one thing that I should thank my Film 100 professor for, that has to be this film. He was the one who introduced this film to me and I fell in love right away. No, not with my professor, silly. I fell in love with the film. An extremely violent Brazilian movie, City of God (Cidade de Deus) was the film that made me appreciate violent films — opening doors to gangster, war and crime movies. A visual masterpiece and an achievement in storytelling. If you’re over 18 years old, you HAVE to watch this.