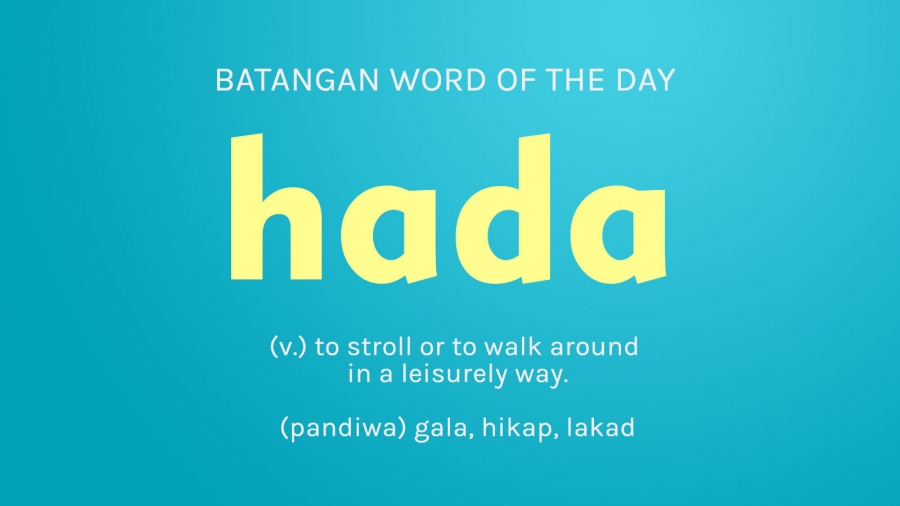 This was what I told my new housemates in UP Diliman when they asked me where I was going. They laughed their guts out. I didn’t know why. But I laughed with them. Pretended I was getting the joke I didn’t even realize I cracked.

And they laughed even harder. Way harder. I was a college freshman, promdi in the city.

“Hada” in Batangas, or at least in Lemery, means “to take a walk.” Hihikap. Gagala. Maglalakad-lakad. It took me almost two years to finally figure out that “hada” in gay lingo actually means blow job. I didn’t know.

When I tell people I’m a Batangueno, their first reaction is always, “How come you don’t have the accent?” I never had that accent. I can fake it but I never had it. We don’t have it in the family because it was our dad, who was from Masbate, who stayed with us at home growing up. But fellow Batanguenos and even those who hailed from other Southern Tagalog provinces easily trace my Batangan roots when I start talking. I may not have the accent, but my diction — ah, my diction — is as Batangan as it can get.

Most of the time, I have no idea that the Tagalog words I utter are words that only Batanguenos comprehend. That’s the difficulty with dialects. With a different language (Ilokano, Cebuano, Bikolano), you are certain that the words you say will not be understood by those in the capital. Dialects are trickier. It was just so hard to tell whether the words I was about to utter were words they would understand or not.

But I’m not complaining. Somehow, it gives me character. And it’s a character that I’ve always been grateful for and will always be proud of.

NOTE. *An undeniable character of the Batangan Tagalog is the use of the verb ending ‘-i’ instead of ‘-na’, especially in the command form. This only happens when the verb stands alone in a sentence or when the verb is the last word in the phrase. –Wikipedia