I clearly remember how my friend Dohna attempted to start singing Tina Arena’s Burn with “Do you wanna be a fo…” and tried to get away with it by claiming she was about to say “forest,” not “foet.” And how she shared some words of wisdom, telling me that “sometimes we have to eat our friends in order to live and because they eat us too.”

Well, Dohna is a college friend. And she’s not alone. There are a lot of people like her where she came from. Many of my college friends are hilariously epic. 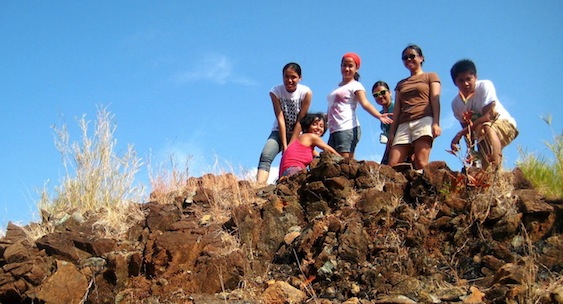 Icang is your girl-next-door type, who just seems lost sometimes. Oh, make that most of the time. She’s the type who reacts to what my other friends and I are talking about just when we have completely moved on to the next topic. She’s adorable like that. No, really, she’s one of my favorite people in the world.

It had been years since I last saw her when we met at Greenbelt last week. I was still single when we last had a conversation and she had a boyfriend then. When we met again, we switched shoes. She was now single and I, happily committed. I was so excited to tell her how happy I was with my current relationship. “We’ve been together for over 2 years,” I said proudly as if saying there’s no way we would break up! “Two years, Icang, 2 years!”

She tapped my shoulder, smiled, gave me a look that I did not know what to make out of, and said “Good for you.” In my head, I was like What the eff was that?

So I decided to change the topic by drawing the conversation around her. “How long were you and your previous boyfriend together before you broke up?”

If you think bringing Jollibee Chickenjoy or pizza into the theater is the height of weirdness, you should meet Leo. One time, he craved for a movie. Problem is, he craved for clam chowder, too. Imagine being seated in a theater next to a guy having clam chowder while watching a film. Excuse me, popcorn, you just got souped!

Last summer, my friends and I spent a weekend at Anawangin Cove in Zambales. Sitting at a table, we were beside another group, who were all a little bit too noisy (and giddy and perky) for us to handle. Mind you, we were perky ourselves so for us not to tolerate another perky group is telling you just how uber-perky the other group was.

Leo was a little bit irritated especially when a girl wearing a cowboy hat began walking around in a very, well, perky manner. Without thinking, Leo quipped, “What’s with the cowboy hat? I mean, where are the cows?”

Oh yes, he did. And it was loud. Loud enough for the other group to hear despite their own noise.

The question is, did they really hear it? We don’t know, but the next thing we knew, they moved to another table at the other end of the stretch. Thank Leo for that.

A Veneto, Trinoma. We were on a festive mood. And as usual, I was putting so much parmesan cheese on my pizza that it started to bother Bebs.

And so Bebs said, “You know what, my dandruff looks just like that.”

I never touched parmesan cheese the rest of the night.

TP isn’t his real name. It was just short for “Thesis Partner” because we were, err, thesis partners back in college. We just never learned to drop the habit of calling each other TP.

Well, we’re both gay and both our families have no idea. However, we have always been very comfortable with each other — always hugging with no malice at all.

One day, we were at a resort TP’s family owns. I woke up and saw TP in my bed. Everyone else was up already but it seemed like TP and I were the only ones who were still needing more minutes of sleep. TP was asleep and I hugged him. None of my friends were bothered; they were very used to it. I asked another friend to wake me up when it was already my turn to shower as we were all waiting for our turns. I wrapped my arms around TP, closed my eyes and tried to sleep again.

Shortly after, I heard the door open. I didn’t budge. After all, it wasn’t my turn to use the bathroom yet. I didn’t move and kept my eyes closed.

When the I heard the door close, there were a lot of OMGs from my friends. So I opened my eyes to see what the fuss was about.

“That wasn’t the bathroom door that opened, was it?” I was starting to get nervous.

“Someone entered the room?”

“Oh.” I never went back to their resort or house since then.

In a cab on the way home from Greenbelt, I was telling Dohna how I felt insecure and worried upon learning that Icang and her ex lasted for 3 years but they still parted ways. “I thought my 2-year relationship with Shy Guy was somehow a guarantee we were inseparable,” I told Dohna. (I know, that’s foolish thinking, but hey, excuse me, I’m in love. That’s what people in love do — fool themselves. LOL.)

I added, “I thought their relationship would reach the John-and-Jane (not their real names) level. You know, they’ve been together since forever.”

“Oh,” interrupted Dohna. “Haven’t you heard? They’re not together anymore.”

“How long were they together before they split up?”

I couldn’t sleep that night.