Whenever I meet people for the first time, it always happens.

When they start their sentence with “I hope you don’t mind me asking but,” I know they are going to ask about what happened to my left arm. Most of my online friends are not aware that I have a huge third-degree burn covering my left arm almost entirely. I usually wear a blazer, but whenever I ditch it, this prominent scar is hard to miss.

“I got it when I was four,” is what I usually respond with. I was a sheltered kid. When I was little, my mother would never let me step out of our property. I could never cross our fences, and I was happily satisfied playing within the confines of our home and backyard.

One morning, my mom was working and my dad was away for a chore when a cousin, Joj, came over to play with me. We were both four, and he was my constant playmate. Although his parents let him come over to our house, my parents would not allow me to return the favor. That morn, he talked me into doing the great escape. We left our home and walked a great distance to a crowded neighborhood in our village.

It had been an hour, and I was having the time of my life, playing with kids in that neighborhood. Taguan. Tumbang-preso. Sikyo. Habulan taya. It was my morning of freedom. My mother wouldn’t know anyway, I thought. A few minutes before lunch, the kids and I decided to play one more game — Pandakekok. It was a game invented by these kids, based on a popular TV show at the time starring Keempee de Leon and Nino Muhlach. The mechanics of the game were simple. It’s pretty much like your ordinary habulan except when the taya catches you as he shouts “pandakekok,” you sit down like a frog until another player taps you again after which you are free to run again.

Near our playing area was a deep pit where dried leaves and plastic garbage were being burned. The taya caught me near that pit and so I sat next to it. My cousin Joj saw that I had been “turned into a frog” so he ran towards me and tapped me so I could run again. The tap was a little too hard, it was more like a push. I was unable to keep my balance and fell right into the fiery pit. The pit was deep, and I couldn’t climb out of it.

The next thing I knew, I was lying there, burning. I remember thinking that I should protect my back so I lay on my left side, allowing the fire devour my left arm and the melting plastic trash stick to it. I still remember the pain. I watched my arm morph into something I no longer recognized. I couldn’t get up. I don’t know how much time had passed until one of the residents there, Kuya Jim, jumped into the hole, picked me up and rushed me to the hospital 20 minutes away.

When I got there, my mother was already at the emergency room. She was crying. That moment, I couldn’t feel the pain anymore; the nerve endings might have been destroyed completely. But it pained me to see my mom heartbroken like that. The first thing I said to her was that I was sorry I left the house. She replied with more tears.

Since then I had always obeyed my mother. She used to work every day, every single day. But since that accident, she skipped Tuesdays. On this day, she would take me to a hospital in Manila for my weekly treatment. We traveled more than four hours from Batangas for 15 minutes of treatment every week. My left arm had been deformed. The molten plastic had somewhat glued my forearm to my upper arm and shoulder. I couldn’t stretch my left arm straight. It was like I had an invisible, permanent arm sling.

I remember, every time my mother would look at me, she would turn her gaze to my left arm and notice that the scar was growing. I would always tell her, “Don’t worry. Papo will fix this.” Papo was what I called God when I was a kid.

Looking back, I’m starting to believe I owe my life to my scarred left arm. People noticed me easily at school. I was the boy with the burnt left arm. I was the boy with the burnt left arm who was absent every Tuesday to seek help. I couldn’t play the games the average, normal kids were playing. I wasn’t allowed to get physical. Every time I watched my cousins and friends play basketball or softball in our backyard and at school, I died of envy. I died every day. So I buried my face in books. I excelled in class because that was all I could excel in. I couldn’t even play taguan or habulan anymore. Much less Pandakekok, the game that changed my life.

I got through Kindergarten and Grade 1 with this baggage. One day, I don’t know what happened but when I woke up, my forearm was not glued to my arm anymore. Save for the scar, it was an exceptionally normal arm. I could finally move and extend it again. It happened just like that. 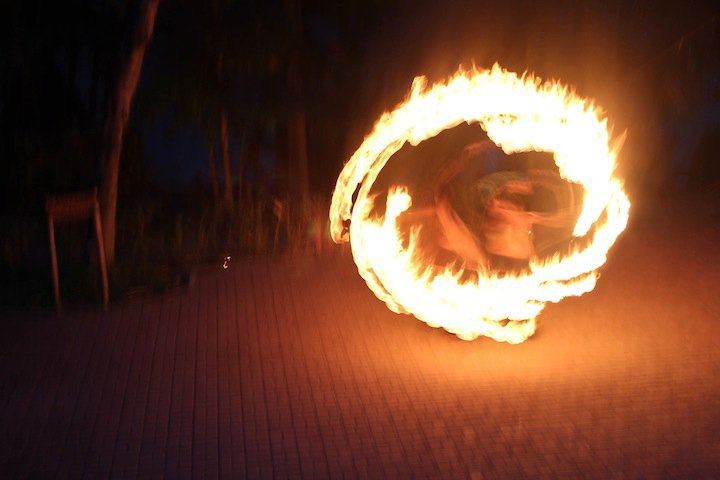 But it was too late, I thought. I was too addicted in academics already. I was not into physical games anymore. I was happy watching. The only sort of physical activity I did was fly kites. And it wasn’t even that physical.

The accident didn’t just ruin my left arm. I had asthma because of it. My doctors said it was a psychosomatic reaction. Asthma had tried to claim my life too many times, too. It also damaged my confidence. Until college, I refused going out in a short-sleeved shirt. My left arm had to be covered all the time because I was sick of people asking me how I got it. That was then. I had learned to embrace it as a significant part of me.

Today, although my left arm is considerably shorter than the right, it is completely functional. The scar is nothing but a constant reminder that once, when I was a kid, when I broke the rules, I burned. I burned but I got past it.

Had my arm not been toasted, I would have been a different person now. Some people may think I must have been afraid to play with fire because of it. The truth is, if there’s something I learned from that accident, it’s that you need to burn metal to make a strong weapon. I’m absolutely happy with my life right now and although I sometimes wish I were physically reliable, I know that there’s a relentless, stubborn flame deep in my soul lit when I was a child that keeps burning. That’s the funny thing about fire; it changes what it burns for good.

One November morning when I was seven, my mother came home with a pack of pancit and some cola. I asked her what the occasion was. “It’s the third anniversary of the accident that burned your left arm,” she answered.

“Why are we celebrating that tragedy?” I was confused.