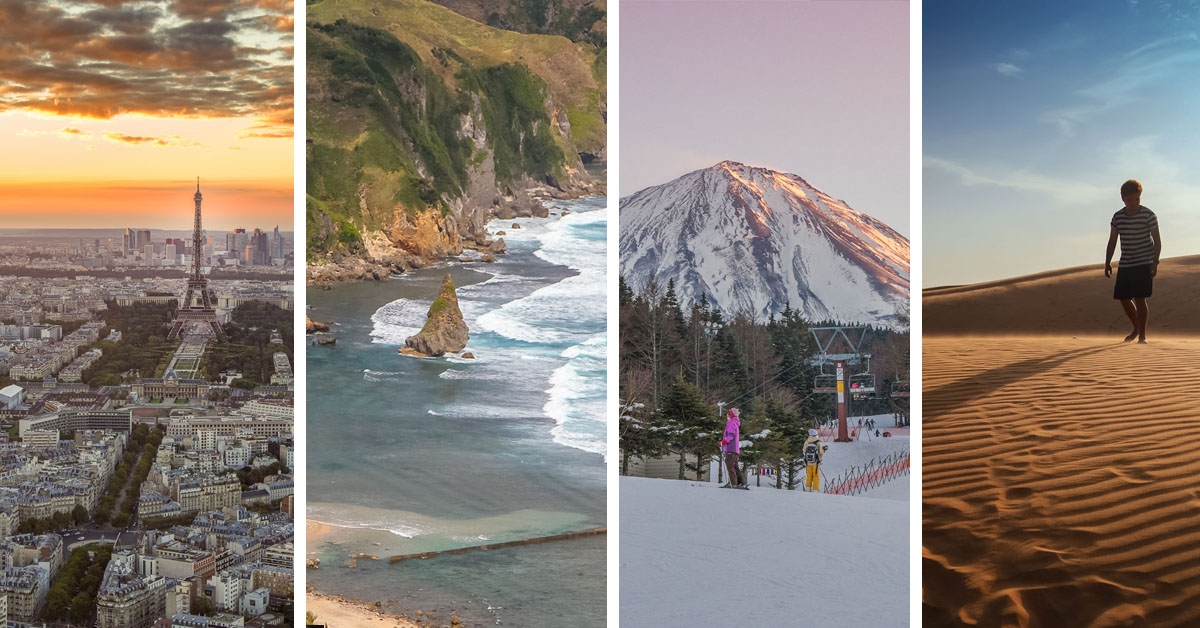 Other than taking a break from the joyful impermanence of the nomadic lifestyle, the only good thing about my self-imposed travel ban is the opportunity to desperately long for the road again. The wait, the crave, the anticipation, the minute before a cartoon show begins and the wide-eyed child stares at the screen, hoping for that endless commercial to end.

How I miss that feeling on the train when I brush the curtain aside to watch the countryside disappear into one big green blur, that distinct smell of airports and how judging people silently makes time fly, and the comedic appeal of the voiceover enumerating the names of passengers who will later walk into a giant metal tube of embarrassment. And of course, nothing compares to the sheer thrill of wandering, whose unpredictability is its only predictable asset.

When I seem to go into another phase of suspended animation, I’m probably reliving one of these wonderful travel moments that made me wish my world would grind to a halt.

10. When I witnessed the Emperor’s New Year Greeting in Tokyo, Japan.

It’s bewildering how the Japanese, even en masse, remains as quiet as the zen temples I had visited days prior. Droves of locals and tourists swarmed at the Imperial Palace to await one of the only two moments their dear Emperor would show up and speak to the public. It was only when the royal family appeared at the bulletproof-glass-covered balcony that the crowd made a sound louder than a heart breaking because someone (me!) could not get closer. And right on cue, amidst the waving flags of white and a rising sun, rose a sea of smartphones and DSLR cameras. I tried to figure out the best setting given that I was as distant to His Highness as my exes were to me, but just like my past relationships, it was over even before I could pay attention.

9. When I was a-mazed in Versailles, France.

It was not difficult to be someone else in the gardens of Versailles. The trees formed maze-like walkways that ushered around the site beyond the chateau. I had a choice between pretending to be an 18th century prince taking in the extravagance of my life and Christina Aguilera belting out Nobody Wants to be Lonely. Of course I chose Aguilera. She’s my girl.

8. When I plunged into solitary reverie in Phuket, Thailand.

It’s not every day that a hot, shirtless Latino would give you a meaningful stare, stop in his tracks, and introduce himself to you. It certainly isn’t for me; the Thai deities know I’m just one dinner away from looking like an overfed, spoiled elephant. But it did happen. There is a God. Tenksgaaad.

But that’s not what makes it memorable. It was my late night walks around Patong while downing bottles of beer and getting mortified for the ladies pole-dancing on the balcony that I once again appreciated solitude. There was just so much that you see when you’re alone. When you’ve been in a relationship for more than half a decade, it’s always an incredible feeling to just be you again. You, whole, not half of a couple.

7. When I swam with turtles in Apo Island, Negros Oriental.

The original plan was to take diving lessons in Dauin, but during that month my pockets were so shallow they could not take me any deeper than my worldview when I’m intoxicated. Fortunately, one does not need to brave the depths to have an encounter with the many green turtles that grazed around the island.

6. When I looked beyond beaches and voodoo in Siquijor.

Despite my mother’s incessant warnings, I boarded a ferry from Dumaguete to Siquijor to journey into the guts of its mystic mountains. The tricycle driver was impressed I was not afraid to go spelunking even when the province’s reputation screams “Don’t do it! Don’t do it!” It had been a while since I entered a cave — not that kind, you perv — and it would be great to do it again. And it was great. Cantabon Cave is nowhere as spectacular as the others, but still a good break from a series of beach stops.

5. When I filled my belly with delight in Bangkok, Thailand.

I was this close to believing that it wasn’t blood running in my veins anymore but tom yum soup after a full week of gorging on bowl after bowl after bowl. Even when my neck was bent admiring the stupas of the Grand Palace — some as ornate as my mom’s misguided dream of me marrying a woman, some as golden as my uncle when he arrived after years of working his ass in Saudi — I still could not stop getting excited about my next meal on some kerbside in Bangkok. Tom Yum is not a soup, it is some sort of love potion that the Thai people collectively bewitch tourists with in an elaborate plan to conquer the world one tummy at a time. Gawd, I love Thailand.

4. When I reached Martian bliss in Mui Ne, Vietnam. 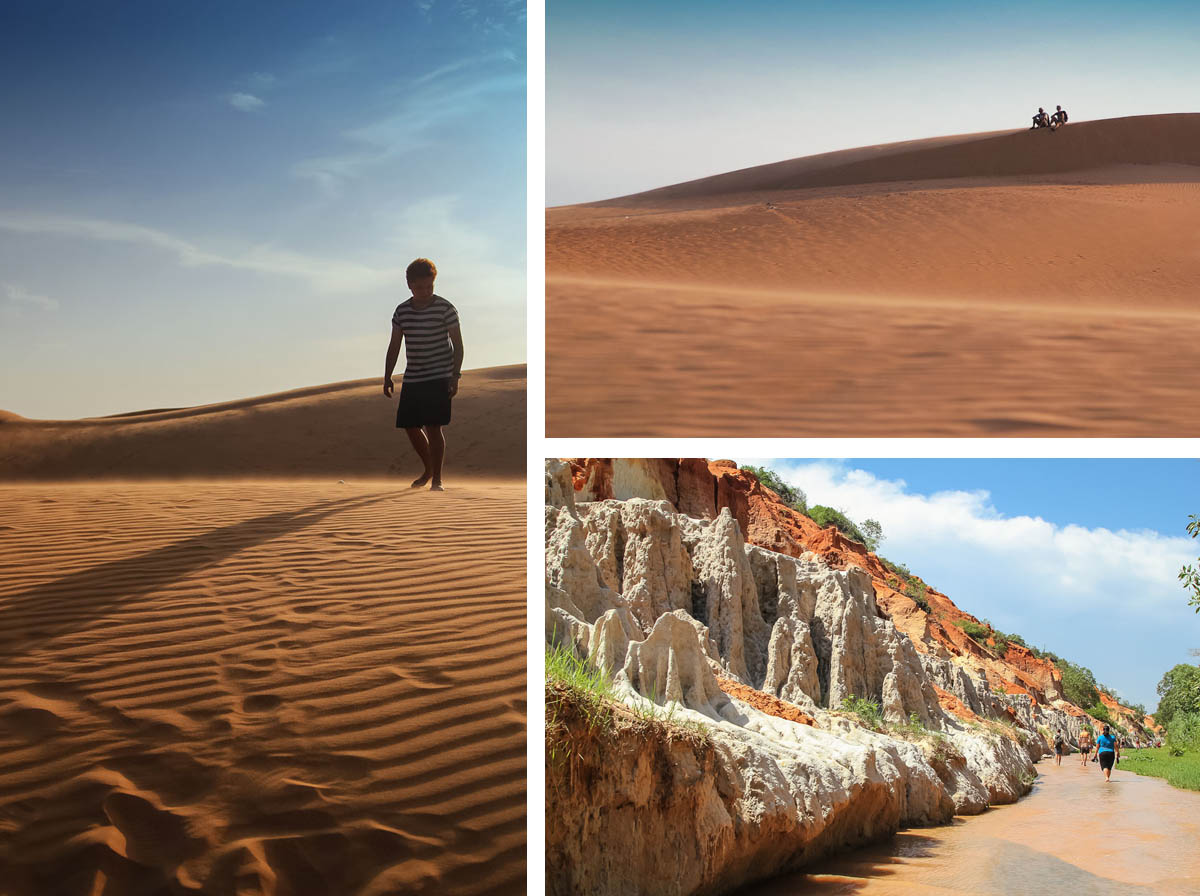 Fact of my sad life: Mui Ne is the closest I could get to Sahara at this point. But as I was leaving footprints on the sand (only to be wiped clean by the strict and meticulous winds), the thought of it being an alternative never popped up in my head again. Mui Ne has its own charm, a piece of Martian paradise on earth (not that I’ve been to Mars). Its most interesting spots are mostly arid, red, and out-of-this-world. Like an astronaut eager to explore a foreign land, I drove an ATV across the sand dunes and schlepped along the Fairy Stream.

3. When I embraced the elements in Batanes.

Clad in bright brand of exuberance and an even brighter shade of pink, I finally set foot on the country’s smallest and northernmost province. Everything here made me feel insignificant. The wind roared as if threatening to take me to Taiwan with it. The waves rumbled as if warning every tourist who would so foolishly attempt a swim. And the hills rolled as if refusing to be conquered. Batanes lies trapped in a hostile territory between two furious seas, but its greatest weapon is its sheer natural and cultural beauty that arrests and takes your heart hostage.

I was content with simply admiring Mt. Fuji from afar, but never did I expect I would be able to touch it, much less ski on it. Fujisan’s peak, bouncing off the pink and purple rays from the sunset, appeared so close I could grab and eat it. On its northern slopes, I spent over four hours, a quarter of which I wasted trying to figure out how to put on the skis and another quarter how to take them off. But the time in between was enough to give me a taste of something I swore to do again and again in the future. It was a cold night in an environment that could rival the frigid status of my friends’ lovelife, but I was able to slide down the slope. Whether or not I was skiing when it happened, let’s keep it a mystery.

1. When I realized that dreams do come true in Paris, France. 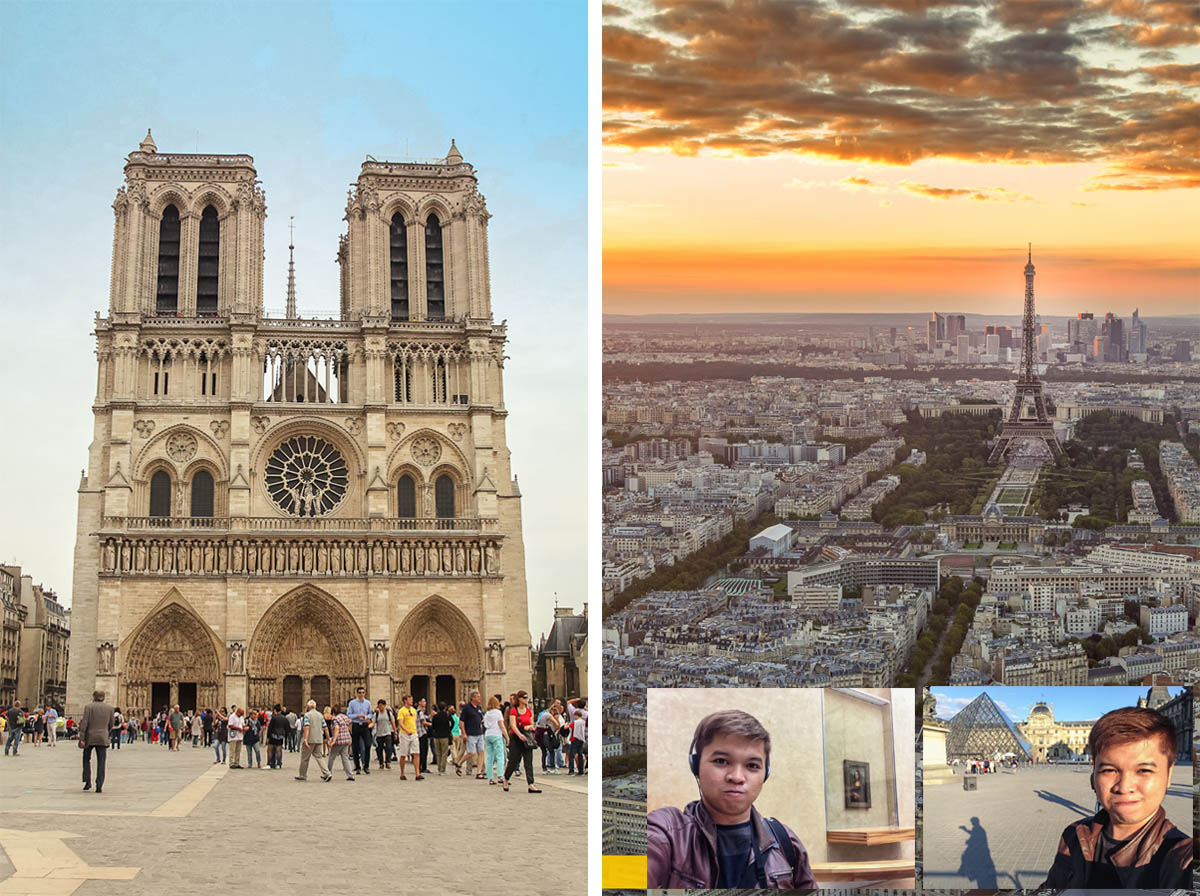 The realization descended upon me as the plane landed at Charles de Gaulle. Paris had always sat comfortably atop my bucket list regardless of how many disappointed tourists cried “overrated” on online forums or how many friends recounted that awful moment someone snatched something from somewhere in their body or a waiter demonstrated how rudeness could ruin a day. “In September, Paris is the capital of melancholy,” a French friend cautioned, describing the gloomy skies and absence of the sun. I obliviously and optimistically trod on. Off to Paris I went.

It was just as I imagined. Even better. I brought the sunshine with me, I kidded: no dark clouds, no gloomy skies, no waiters from Rudetown. I visited the Louvre, the Eiffel Tower, Père Lachaise Cemetery, Le Marais, the Notre Dame Cathedral, the Latin Quarters, Montparnasse, and as many locations in the film Je T’aime Paris; drank as much wine as I could afford; buried my face in crepes every time I saw a stall; used everything in my sorely inadequate French vocabulary and said merci and s’il vous plaît to my stupid heart’s content, even when it didn’t make sense at all to say so. I was the happiest tourist Paris has ever seen.

Looking back, two moments stood out. First, when I visited a Parisian friend, whom I met in Chiang Mai two years before, and her mother. Cigarette smoke, laughter, and conversations about food, travel, and life filled the room.

The other was on the train back to the airport. “It’s my favorite city in the world,” is what I say about every city in the world. But it was different this time. Paris isn’t my favorite city; it is my city. I felt like I belonged there. And as the train pulled into Charles de Gaulle station, I could not help but tear up a little. Paris was a dream, I was in that dream, and it was a shame it had to end so soon.