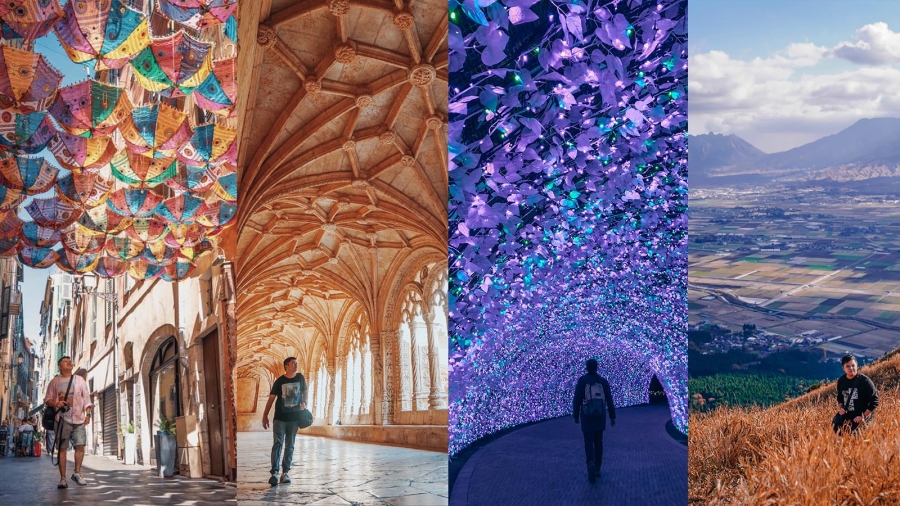 2019 is one of my most travel-packed years ever. This year, I set foot in 15 countries and 11 Japanese prefectures. I also got to return to some of my favorite Philippine destinations. But here are 13 of my most memorable moments on the road.

13. When we lit up our world in Nabana no Sato, Japan. 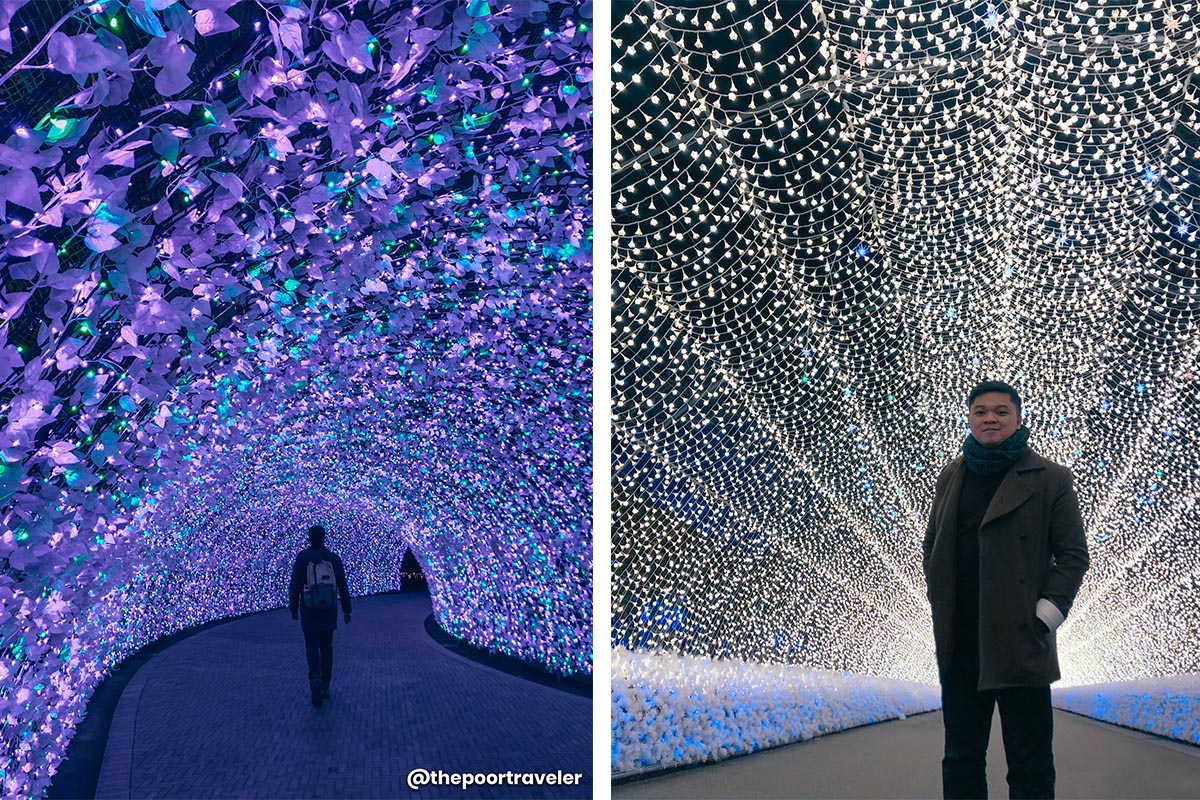 Nabana no Sato isn’t just a flower park for me. It is perhaps the most stunning flower park I have seen in Japan. The most magical time to visit is October to May, when the park shimmers with massive winter illumination displays! It was my first time to see one of this scale and grandeur.

12. When I was reunited with a cousin in Milan, Italy. 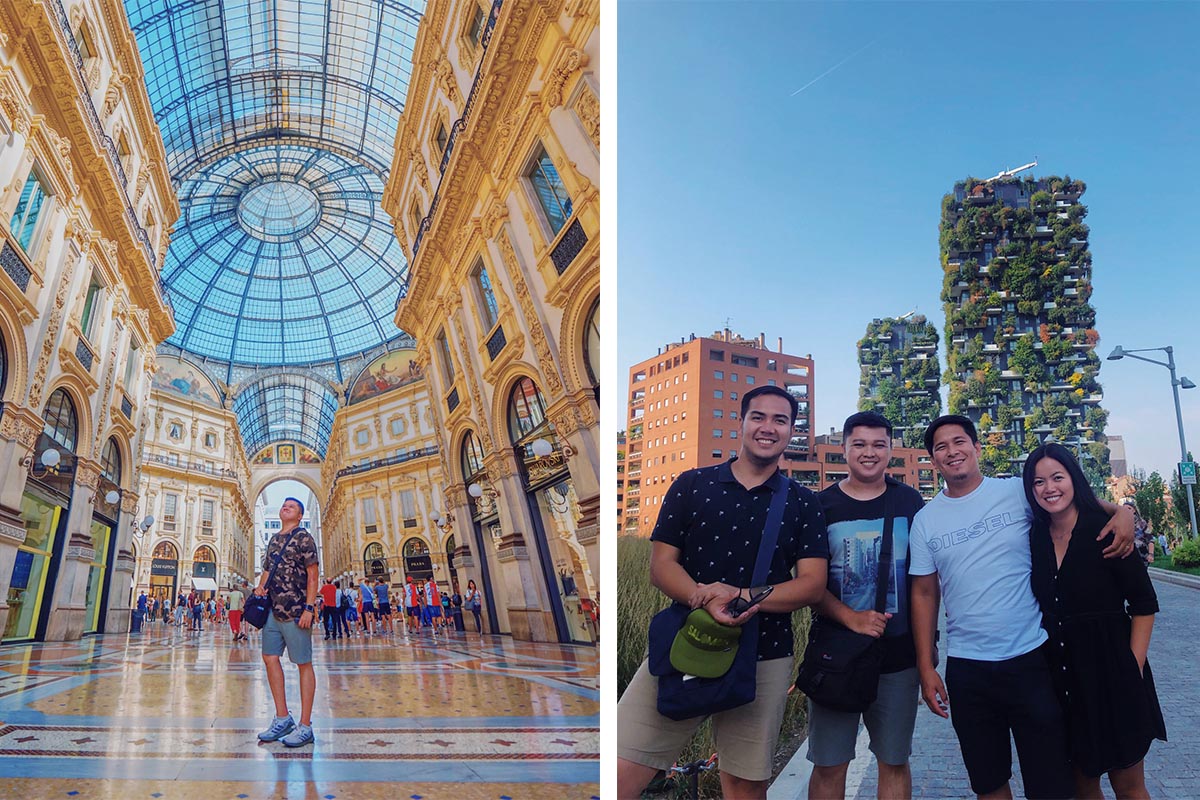 Jojie was not just a cousin; he was a close childhood friend. It had been years since we last saw each other, after he moved to Milan for good. So when we finally met again, it was a memory for keeps.

11. When we found beauty in details in Lisbon, Portugal. 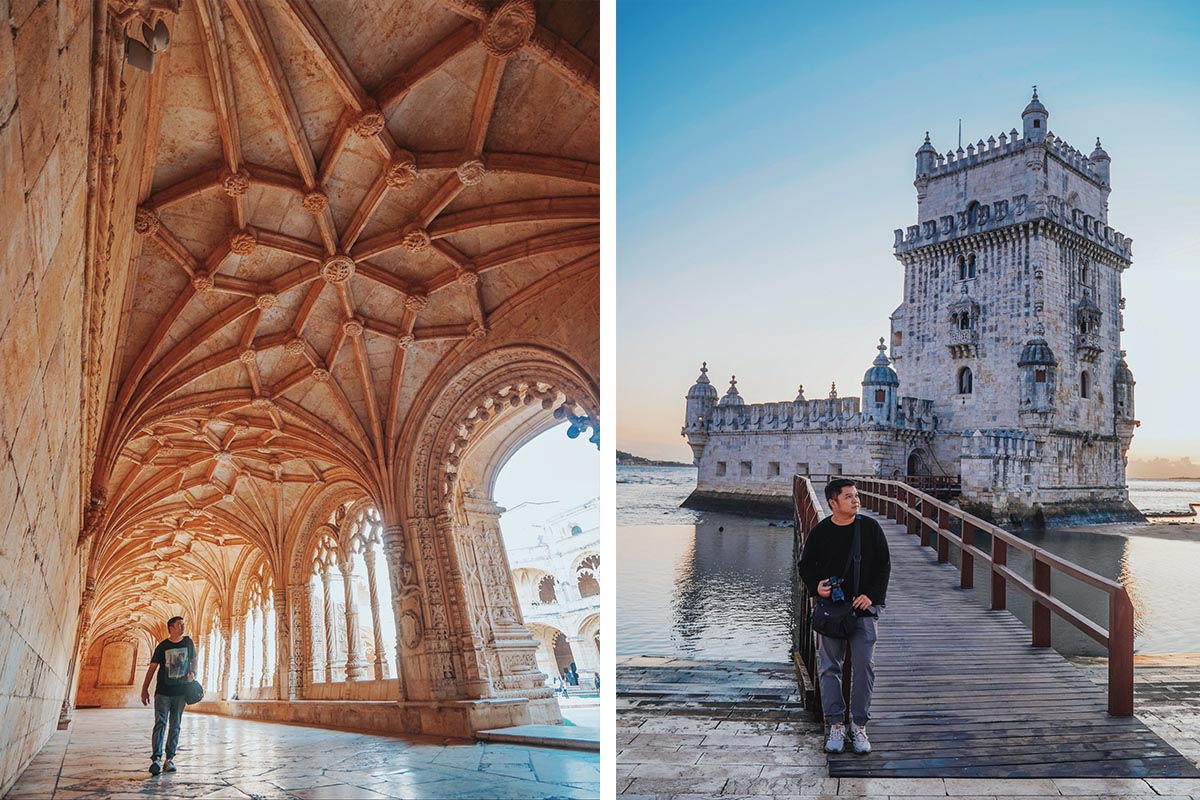 Lisbon is visually exquisite. You can easily see it from afar. But it’s even mindblowing up close. From the sidewalk floor patterns to the wall tiles to the ceiling ornaments to the building colors — Lisbon’s beauty is in the detail. It’s one of those cities that get even more breathtaking as you stay longer.

10. When we had a golden welcome in Dubrovnik, Croatia. 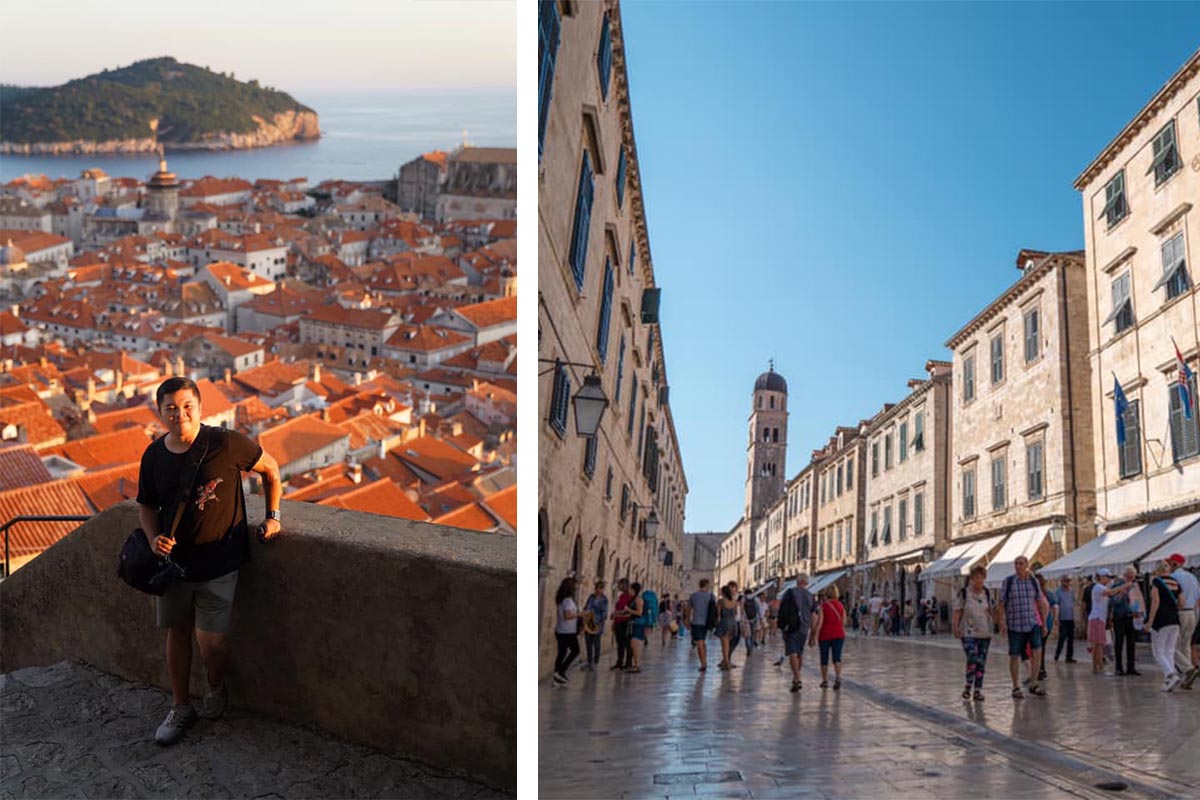 We had nothing planned for our first day in Dubrovnik. As we were walking aimlessly around the Old Town, we spotted the entrance to the city walls but the entrance fee was pretty steep. For a while, we discussed whether or not we should go for it. We did. It was the right choice. The views from the city walls are beyond breathtaking. Since our visit was at sunset, we took advantage of the golden hour, when the rays made the city’s signature orange roofs shimmer.

9. When we stuffed our face with tapas in Barcelona, Spain. 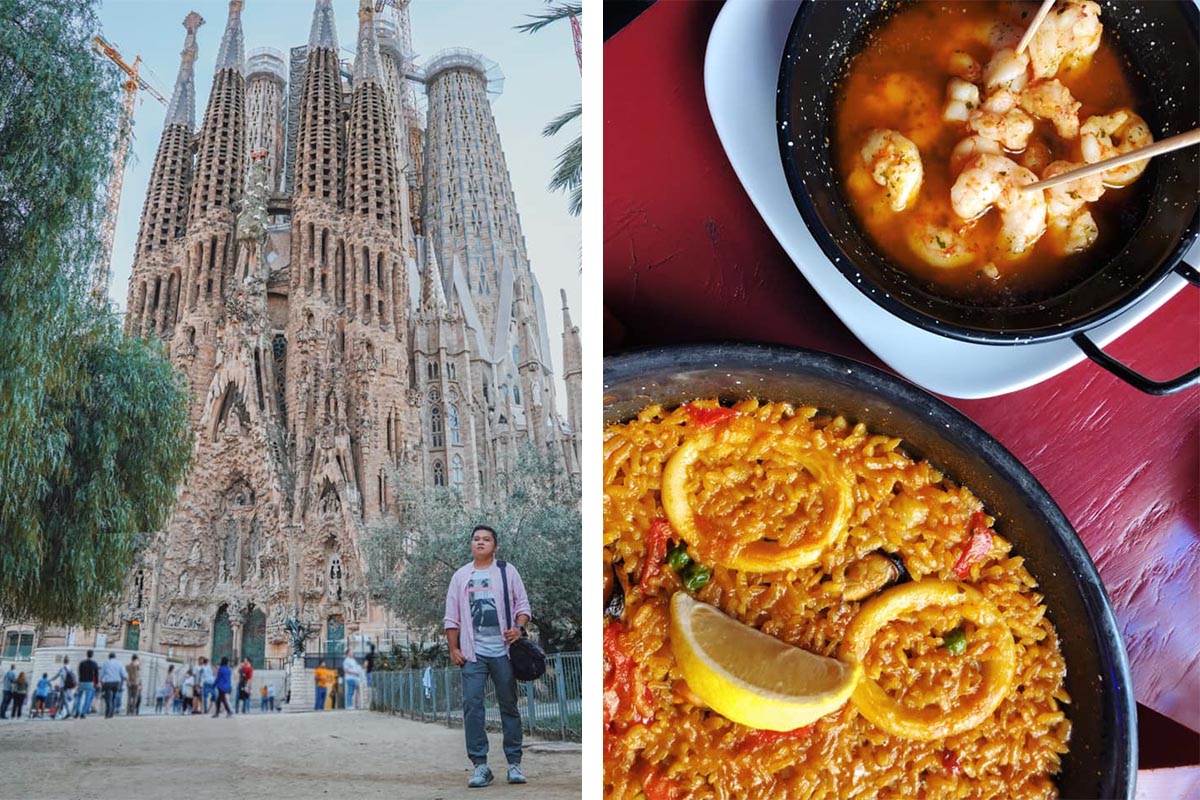 Never did I imagine Barcelona as a food destination. Yet, when I was there, all I did was eat.

Barcelona was not part of our original itinerary but we had to make numerous adjustments on this trip because of unforeseen events. But it was one of our favorite stops on our Euro Trip primarily because of the good food at great prices.

8. When Nice made everything nice. 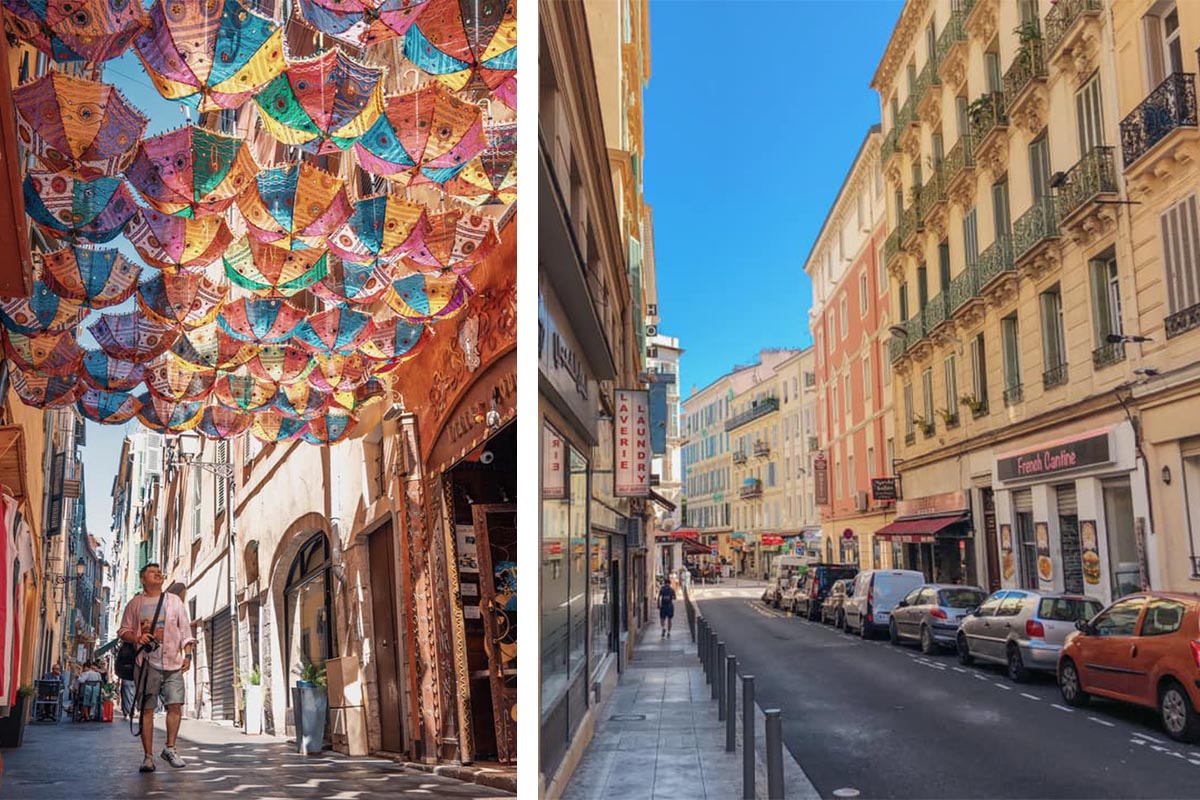 I will never forget the refreshing feeling that took over me when we reached the French Riviera. Nice was the second stop of our Euro tour this year. Our first stop was Athens. We stayed there for a week but I was down with the flu and Vins fell victim to a band of thieves, and it really did hurt our overall mood. We needed Nice to make everything NICE! (Sorry, had to do that pun! 🤪)

Nice is painted in pastel, soaked in sunshine, and has a vibe that feels “younger” than most European cities. It was our kind of city!

7. When I made a gamble on Montenegro. 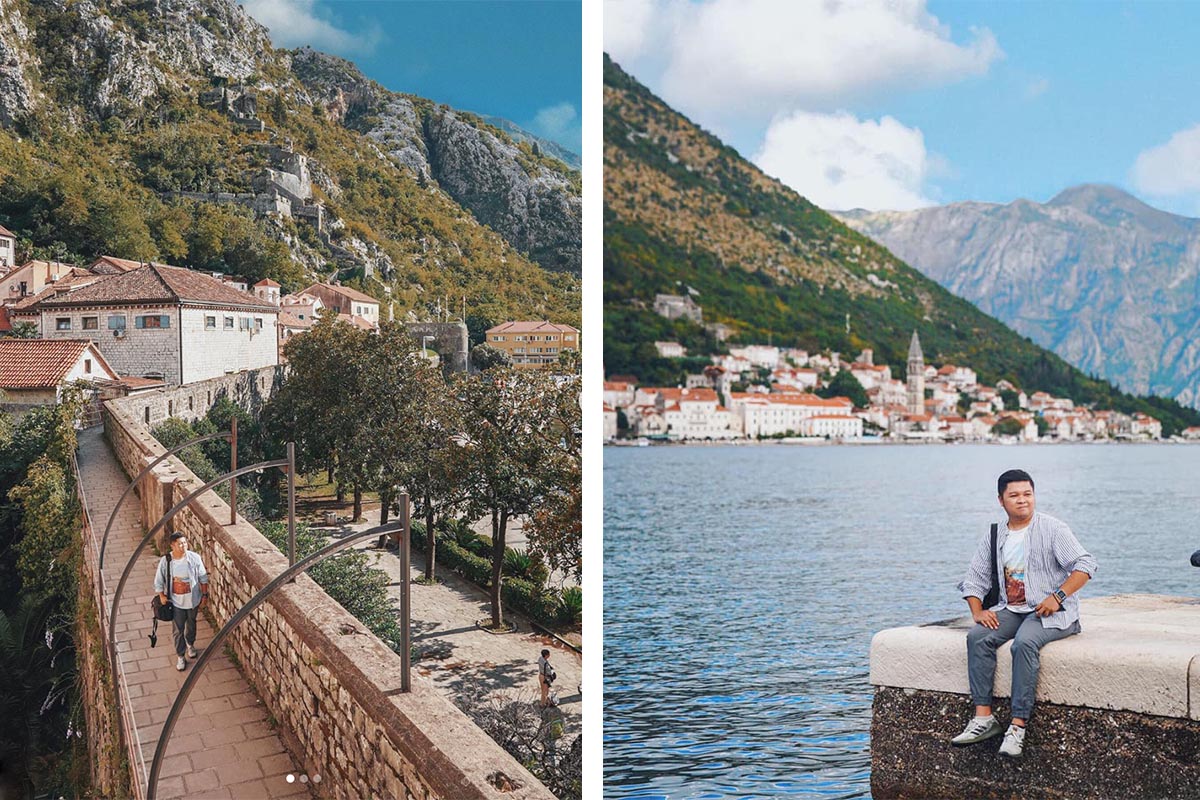 I wasn’t sure if my double-entry Schengen visa would be honored by the Immigration Officers of Montenegro, so before the trip I emailed them. But they did not reply immediately. Hoping for the best, we still made our way to neighboring Croatia, so in case they reply in the affirmative, it would be easy for me to visit. Turned out I had nothing to worry about. Not only do they honor a double-entry Schengen visa, they also accept a valid multiple-entry Japan visa!

Montenegro is relatively inexpensive, especially compared to Dubrovnik. Many cities are very small and can easily be explored by foot. The views are so breathtaking. Everywhere you look, nakaka-in love. But more than that, the Bay of Kotor is a UNESCO World Heritage Site. The site includes Kotor, Perast, and Risan. Pati yung fortifications of Kotor.

But the highlight of our stay in Montenegro was the retired couple from the Philippines who were also backpacking across the Balkans! Despite the age gap, we instantly clicked and had a wonderful time exploring with them.

6. When I fell ill and fell victim in Athens, Greece.

Our most recent Athens trip was a series of unfortunate events. Vins fell victim to a band of pickpockets barely an hour since we arrived in the city. Then I fell terribly sick for our entire stay, so I wasn’t able to see much. Then Vins caught the same illness. Fortunately, it wasn’t our first time in the city.

5. When we got emotional in Nagasaki, Japan.

Our group could not help shedding some tears as we looked at the photo of a boy carrying his dead little brother on his back. The whole day, we had been presented with tales about Christian persecutions and World War II. That moment at the museum next to the Oura Cathedral was the point when all the built up emotions finally tipped.

Nagasaki has a lot of stories to tell, and they’re stories we can all learn from.

4. When we dropped everything in Sagada, Philippines. 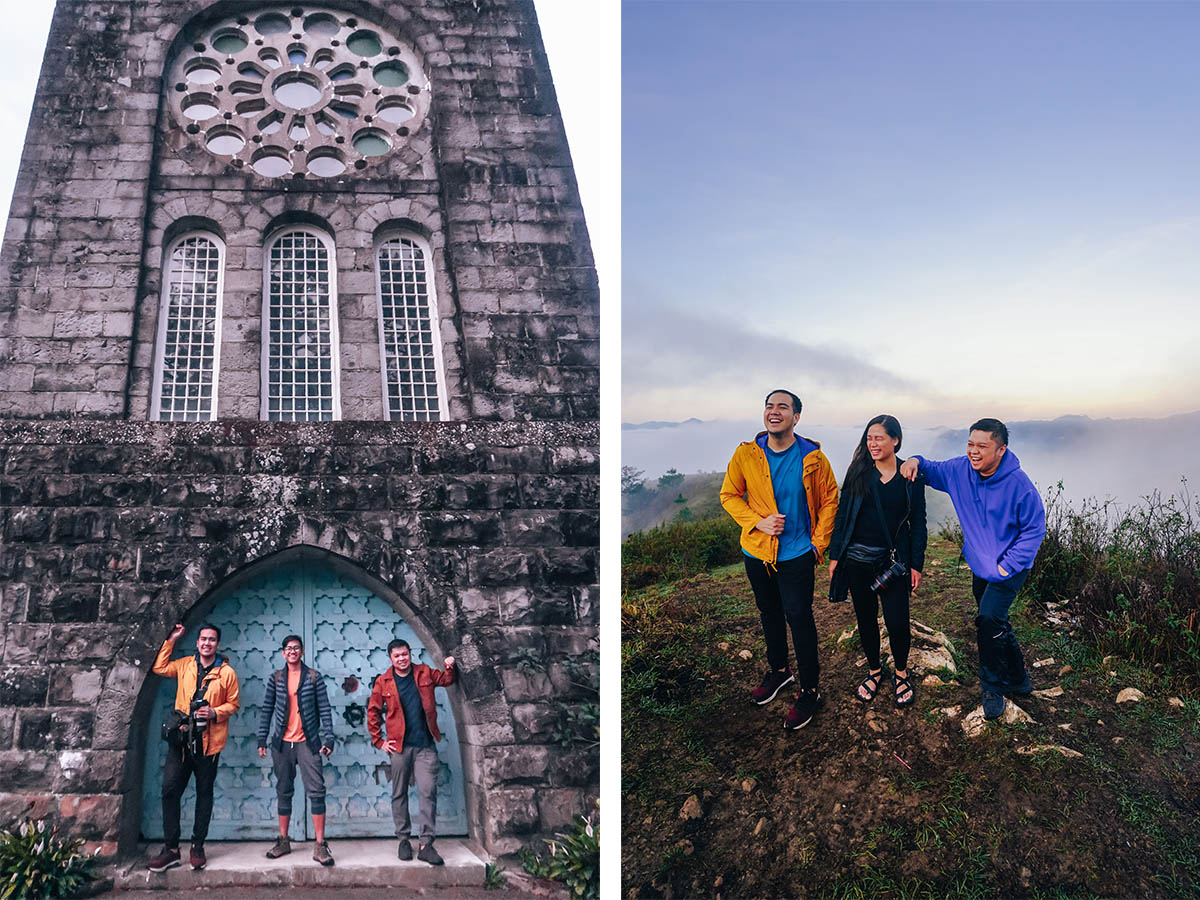 To escape the terrible water crisis in Manila, we decided to head over to Sagada. And escape we did. Since it was already my fourth time here, I checked my blogger shoes at the door and just enjoyed the place with some of the closest people in my life. It was long overdue and well deserved.

3. When we chased the Ozzy sunset at Port Campbell, Australia. 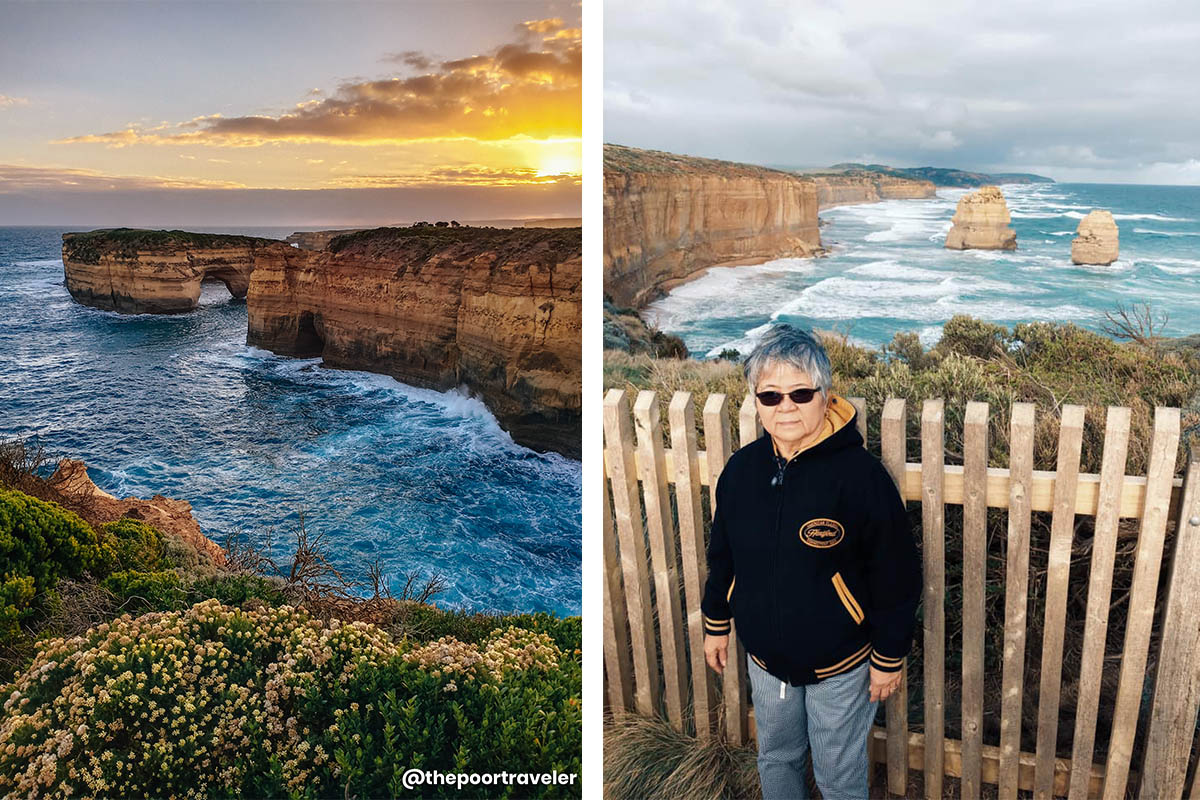 As promised, I treat my mom to an all-expense paid trip every year. This time, I took her to Melbourne, her first destination outside Asia. I enjoyed all her side comments as she was amazed by how different things are on the bottom half of the globe. But the most unforgettable moment was when we caught the sunset at Port Campbell.

2. When we got stranded in Slovenia. 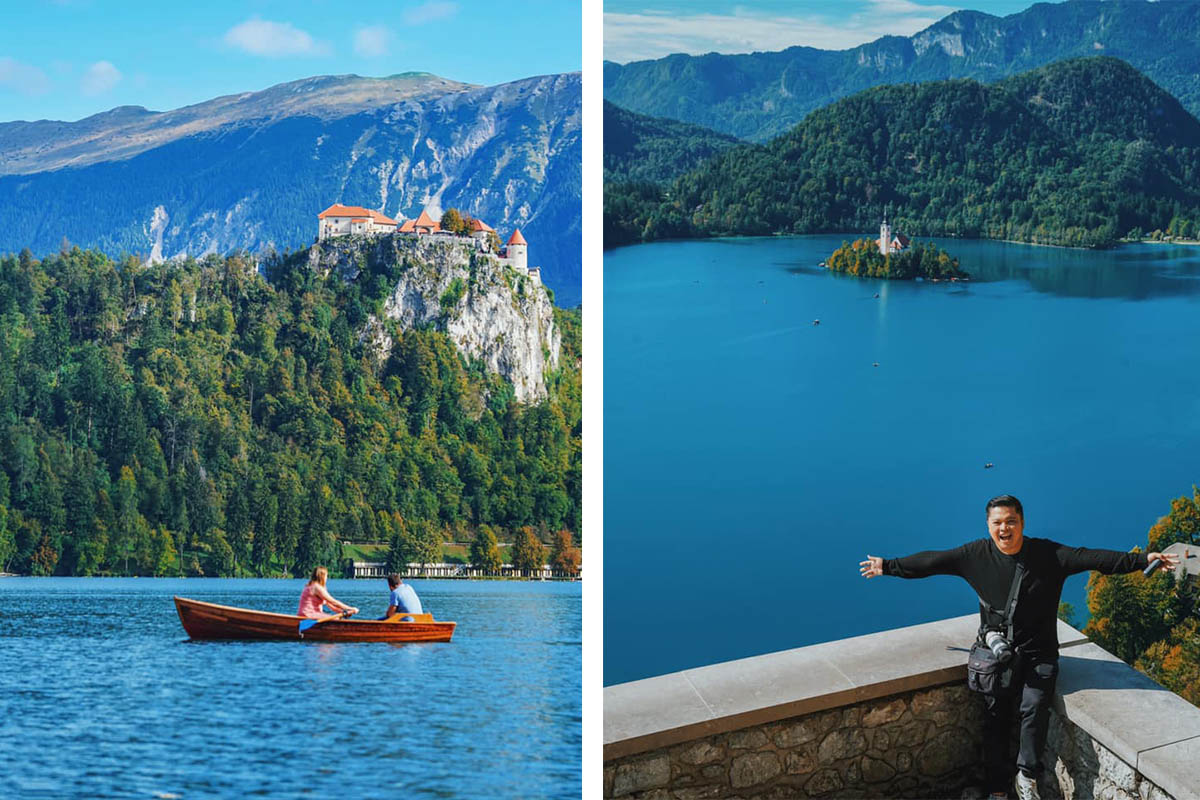 Adria Airlines went bankrupt days before our flight. It was one of the very few non-land journeys we planned for our Euro trip, so the flight getting cancelled really put a wrench into our itinerary. We decided to extend our stay in Slovenia. It turned out to be a blessing in disguise because this country is fabulous. We tremendously enjoyed Lake Bled and Postojna Cave!

1. When we went off the grid in Turkistan, Kazakhstan. 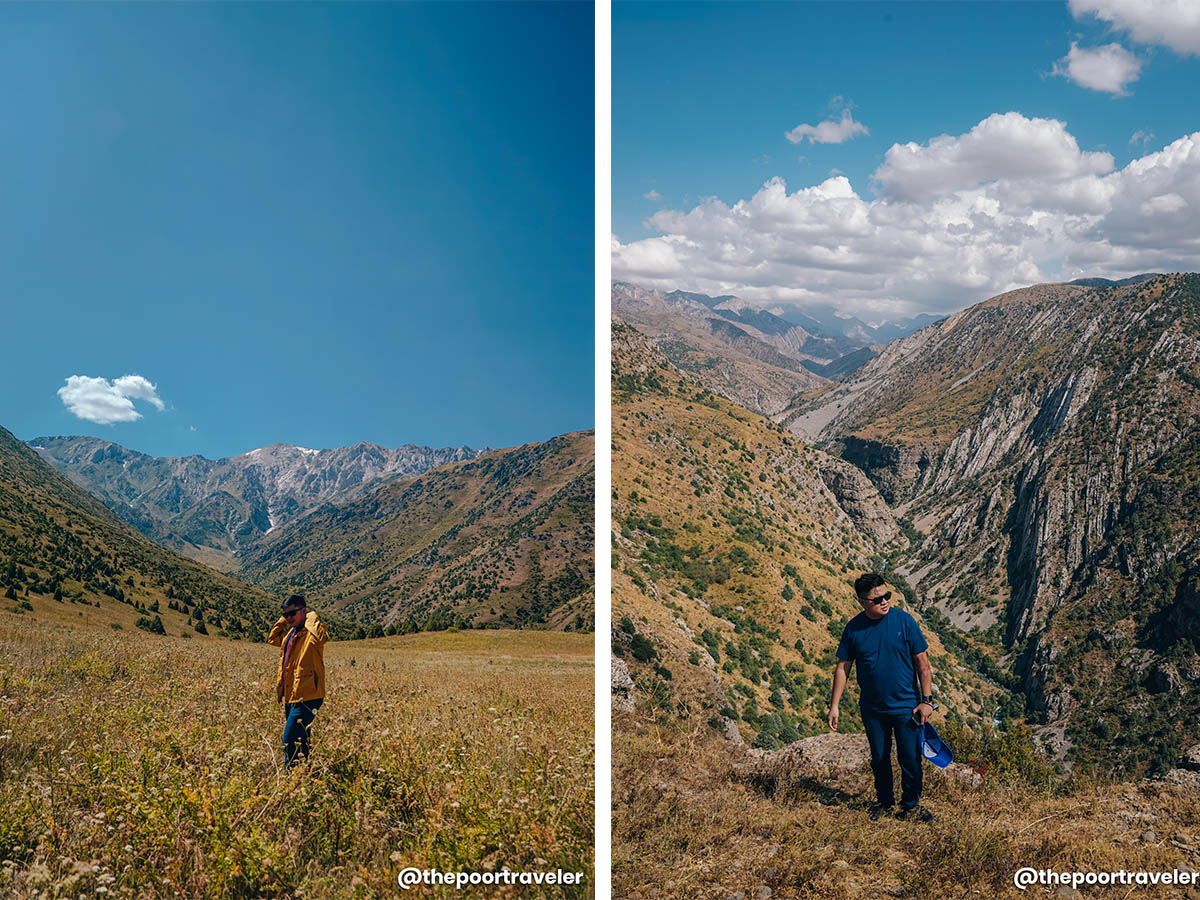 There was no internet connection at the Aksu Zhabagly Nature Reserve, allowing us to step away from social media for the first time in a long time.

We’d be the first to admit that we don’t know much about this region or Kazakhstan in general prior to this trip. But we were surely captivated. One thing we like is how well they protect their national parks and reserves. In order to preserve the place, the government limits the number of visitors. We were privileged to be there.

But our most memorable moment happened elsewhere — at the Arystan Bab Mausoleum near Turkistan City.

After the prayer, the man emerged from the hall, walked in my direction, and started a conversation with me in the vernacular. After four days in Kazakhstan, I had gotten used to being mistaken as a local, so I politely said I could not understand. I caught the word Thailand in his next question, so I answered that I was from the Philippines.

In a warm voice delivered with a smile, he said another sentence in Kazakh. Thankfully, by this time, someone from our tour group was nearby and translated for us. “I’m not sure if you’re Christian or Muslim,” he translated, “but that doesn’t matter because everyone is welcome here.” Before saying goodbye, he shook my hand and said, “May Allah bless you.”

Amid the grandeur of the setting, it is moments like this that I remember the most about South Kazakhstan, moments that highlight its people, their warmth, and the reasons why we travel.